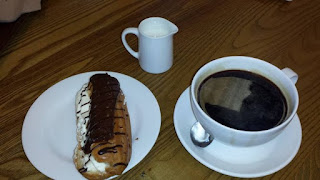 I slept through the night, which wasn’t a bad thing. Even though my sleep was plagued with odd vivid dreams. I woke to a nose bleed; I’ve not had one of those for a while. It does make shaving tricky.
Over brekkie I watched an episode of “Dad’s Army”. Private Pike had been called up to join the RAF but was turned down because of a rare blood group. The episode was somewhat spoiled for me by the trivial detail that “rare blood groups” hadn’t been discovered in the time in which the show was set; to say nothing that a rare blood group is generally no obstacle to having a transfusion.

I took "Furry Face TM" for a walk round the park. I did snigger; just lately the Internet has been awash with pictures of schoolkids looking immaculate in their new school uniforms. As we walked we saw many schoolkids, all of whom looked as though they’d slept in their school uniforms having worn them for three weeks and having climbed through a hedge in them.
Mind you for all that the mothers on social media are grumbling about school uniforms, they do serve a purpose. I see that a local headmaster is in trouble for insisting on a standard for school uniforms. I think he’s right to do so. I can remember the “fun” we had at cubs with uniforms. All the time kids stuck to the uniform, all was fine. However the moment we eased up on the insistence on cub uniform the kids immediately started coming in the most expensive designer clothes, and there would be a competition to see who was in the most fashionable clothes each week. And those kids from the poorer families who couldn’t afford to spend a week’s wages on a T-shirt were made to know just what paupers they were by the other kids.
A school uniform has its uses.

Remembering the trouble I had getting to work when on the late shift last week, I left home rather early this morning. Having failed to find a geocache in Kennington I then drove out to the pond shop in Challock. I’ve found them to be rather arrogant in the past but I needed flocculant. Bearing in mind their arrogance I suppose it is no surprise that they’ve now closed.

I then set off work-wards, but seeing I still had a little time I stopped off at the garden centre in Chartham. You can’t beat a cup of coffee and a slice of cake…

After cake the rest of the day was a tad dull.