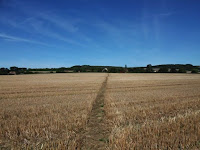 Yesterday I had an early start (what with the fishing) so I set an alarm. However I forgot to turn it off. I wasn’t impressed when it went off at 5.30am this morning when I could have slept a lot longer.
I didn’t really get back to sleep after that.

I checked out the Internet over a spot of brekkie. Little had changed really. So with a little time on my hands I mowed the lawn. It hadn’t been done for a couple of weeks and was rather out of hand. As is all the overgrowth pouring over the fence from next door. I shall deal with that another time.
I then carried on updating the website of the various bat-camps we’ve had over the years. I’m not that far from completion now – until next year’s camp.

With the lead popped onto my dog we stood outside and waited for the arrival of Gordon and Norton, and then we all drove out to Wye where we soon met Mark. Three of us (and two dogs) then walked a series of geocaches from Wye up into Boughton Aluph and back again. It was a glorious day for a walk; we saw lapwings and a woodpecker. There were fish in the rivers; there were spectacular views.  Norton did disgrace himself by wallowing in some rather stagnant water, but that is what dogs do.
There were two pubs on our walk; at the half way point we had a pint of “Trout Pout” at Boughton Aluph’s Flying Horse. We had our sandwiches there too. I’m not sure if we were allowed to scoff sandwiches in the pub’s garden, but no one said we couldn’t. And we had a pint of “mad cat red ale” at the end of the walk at the Tickled Trout. It was good to sit in the beer garden at the water’s edge and watch the dogs playing in the river. Mind you we did get a few odd looks from an old biddy in the beer garden. It was only as we were leaving that we saw the notice about dogs having to be on leads.
I took a few photos whilst we walked. It was somewhere I’d certainly walk again. And being very close to home I may well do again.

Geoaching-wise… I’m sorry to be critical but… The geocaches were excellent. Straight-forward hides, and mostly large caches big enough for travel bugs and stuff. But in all honesty I personally felt there were nowhere near enough of them. The rules say that the caches can’t be closer than one tenth of a mile apart. In new money that is one hundred and sixty one metres. I’ve put out five similar geo-series (two since archived) and I realise that sometimes things like open fields stop you putting caches out. But on average I aim to have caches about every two hundred to two hundred and fifty metres (or so). Much as I really enjoyed today’s walk I personally feel that caches half a mile apart is too far apart. Today’s walk was a series of fourteen caches over six (or so) miles. It could have had thirty or more caches.
I noticed that our group was only the third finders of one of today’s caches; the thing had been out for a month. Is it its isolation which has put people off of going for it? - my series in Challock (not five miles away) which went live at about the same time has had three times as many hits.
Having said that, some people prefer them more spaced out. Each to their own…

"er indoors TM" came home and boiled up fish and chips for dinner. Not too shabby if you like fish and chips (which I do).
I should really have an early night. I’ve got to work tomorrow…
Posted by Manky Badger at 9:00 pm