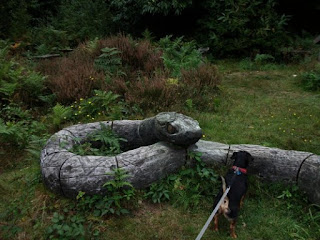 I slept like a log; eight hours sleep last night. How about that!! Over brekkie I was pleased to see (via Facebook) that a colleague was having a birthday today; I could post up my new You-Tube birthday video that I’ve made. The previous one was over six years old. I shan’t post a link to the new one here; it will be a nice surprise when a birthday comes along.


My little dog wouldn’t eat his brekkie today; he always knows when I’ve got a walk planned for him. So eventually I gave up trying and told him he could go hungry. We got in the car and set off to Matfield. I arrived early, but Dick was already there. Aleta and Gordon soon arrived, and we set off hunting geocaches. We do that from time to time.


We had a really good walk. The weather was nowhere near as cold as I thought it might be; I took my fleece off right at the start. The walk was a tad hilly though. But just over six miles was just right for today.


It was a good first outing for my new shooting jacket. After the last one fell apart after a couple of hours use I actually got a far better one (at half the price) from eBay and I did the trick today.


And I think I might be getting used to geocaching in imperial units. I’ve always liked to measure smaller distances in metres, but longer distances in miles. “Hannah” (my sat-nav) does either/or.


I took a few photos as we walked. If nothing else my mum likes to see them.


Cache-wise it was an odd walk. I’d seen the geo-map and had suggested we make the walk up as we went along, and that was pretty much what we did. There didn’t seem to be any logical order or sequence to where we were going, and despite having worked out what seemed to be a “best route” there was still a lot of back-tracking. The individual caches were in reasonable order (because previous finders had done all the required maintenance), but the GPS co-ordinates were up to twenty metres out. And there is no denying that we could just have done with some instruction or guidance from whoever it was that had hidden them.


It turns out that they were hidden by a scout group some two years ago. They were put out under a geo-profile which has never logged a find, and which hasn’t been active in over a year. The series was *far* better than that put out by some local scouts, but even so could have been so much better.


Once home I slobbed in front of the telly catching up on what the SkyPlus box had recorded.  Sunday’s episode of “The Last Ship” was rather good. However (as I’ve said before) the show does suffer from most of the action happening quite a bit away form that ship.


And yesterday’s episode of “Dark Matter” was quite good; it was the end of season cliff-hanger in which all of our heroes were blown up on an exploding space station. Apparently there will be another season of the show so I’ll be interested to see how they get out of that one.


Being Tuesday the clans gathered. This evening in Arden Drive. Insults were bandied, news swapped, and an episode of “Gotham” watched. I’d forgotten how good that show was.


And my lego advent calendar has arrived…