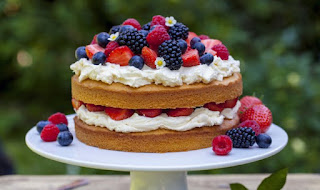 I went to the loo shortly after 4am this morning; as I was about to get back into bed I tripped over my little dog who was sleeping on the bedroom floor. Just as I dozed off he started coughing. I say "coughing"; it was more like a duck's quacking. I was about to take him for a drink of water when "er indoors TM" leapt up, grabbed him and unceremoniously dumped him on me.
We both lay in terrified silence after that.

Over brekkie I watched Sunday's episode of "Poldark". It was rather good. I can remember my Grandmother and various aunts watching a version of the show in the 1970s and thinking it was utter rubbish. Either this version is far better, or I'm just getting older.

With neither "er indoors TM" or "Furry Face TM" moving from their pit I left them both and set off to work. As I drove I caught up with the news. there is talk of shaking up Parliament by getting rid of sixty MPs and re-arranging the constituencies so that they all have about the same sized electorate. A sensible idea... if you believe in democracy.
Apparently Jeremy Corbyn is one MP whose seat would disappear. That might solve a problem or two.

And there is going to be a by-election as David Cameron is to resign as a Member of Parliament. It will be interesting to see where he goes and what he does. What does a deposed Prime Minister do once given the heave-ho?

And I was rather amazed to hear that one of my favourite TV shows; The Great British Bake-Off will no longer be on the BBC after the current series. Apparently the BBC can't afford the show and it will be moving to Channel Four. The pundits discussing this said the BBC offered fifteen million quid to the makers of the show, but they wanted twenty-five million.
Will it work on Channel Four? Here’s a thought - the BBC does not run adverts. Channel Four does. Will each episode now be twenty minutes shorter?

I got to work, and came home again. Once home I took "Furry Face TM" round the park for a walk. Fortunately for my nerves he didn’t misbehave at all. "er indoors TM" boiled up a rather good bit of dinner. And hen we went round to deepest Willesborough where the clans gathered, and I nearly (but not quite) stayed awake for an episode of “The Flash”