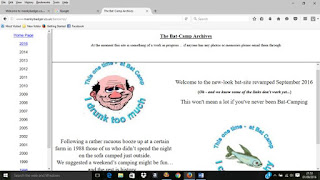 Another restless night. No matter how tired I get and despite the best efforts of my CPAP machine I simply cannot sleep for long enough because I cannot breathe. I lay awake for much of the night and when I should be up and about and doing things during the day time I find myself falling asleep. I *really* hate that. And everyone takes photos of me asleep and plasters them all over Facebook as though it is some great joke. Would people do the same if I was having an epileptic fit or a diabetic coma?
Hopefully more surgery up the nose will cure the problem; even if only temporarily. The appointment with the ENT specialist can’t come soon enough.

Over brekkie I had a look-see on-line. Lots of people were posting pictures of children in school uniforms getting ready to go back to school. I glossed over them as quickly as I could before I started experiencing “Swadelands flashbacks”; I had one or two letters of complaint about "My Boy TM" over the years (including one when he was snogging when he should have been doing lessons) and "Daddy’s Little Angel TM" was never the ideal pupil.

I had hoped for an email telling me of a new geocache on the way to work but my morning haul of emails was rather dull. So I checked out the news – The Crystal Maze is to come back to the telly; this time with David Tennant running the show. Personally I always liked Ed Tudor-Pole in that role, but doesn’t this just sum up what is wrong with TV at the moment? With Star Trek and Red Dwarf due for new series soon and Poldark coming back on Sunday (to say nothing of Are You Being Served), there are so many re-makes. Let the old stuff go. Make new programmes!

I took "Furry Face TM" for a quick walk round the park. He humped a small fluffy dog to the consternation of some silly old woman who wasn’t at all impressed by my telling her that he had been “done” three years ago. She could tell he hadn’t been “done” because of the expression on his face. I tried to show her his lack of “flowers and frolics” but she was having none of it. Apparently you can tell if a dog has been done because it has a chubbier happier expression. One lives and learns. I suppose my little dog has lost a lot of weight recently after his illness, but he still doesn’t have any “flowers and frolics”.
We also saw a very odd jogger. Her legs seemed to be outracing the rest of her, and were a good foot (if not two) in front of her top half. She didn’t look to be at all comfortable.

As I walked my phone beeped with an email from the pet insurance people. They weren’t happy that I hadn’t filled in their questionnaire which they claimed they’d emailed me last week. So once home I had a look on-line. I’d asked the insurance people to pay the money from my claim (after "Furry Face TM"’s stay in dog hospital) into my bank account. No payments had been made. I felt physically sick and, expecting the worst, I gave them a ring. I *need* that six hundred pounds.
I got through to a really helpful chap who looked up my details and said they’d only received the claim form yesterday. He went through the details and saw a lot of information (that the vets were supposed to supply) was missing. He said he’d need to contact the vet before he could even begin to look at the claim. And furthermore it usually takes twenty-five days between receiving the claim and paying up (or telling the client to get knotted).
The nice man was at a loss to explain why I’d been sent the questionnaire. I filled it in; entering “don’t know” for most of the answers.

I then spent a few minutes on my latest project. In September 1998 a gaggle of us spent a weekend camping at a certain farm in Smarden. Over the years we’ve camped there a few times and I for one took photos. I did have a website of memories of those camps, but when mankybadger dot com was wiped (cheers EE!) they all went west. However that website hadn’t been updated for years and so it’s prompted me to re-make that website. It is still all in the early stages; in fact so far I’ve only got the camp from 1988 done. If any of my loyal readers have any photos or memories from any of those camps please do email them to me. In the meantime I’m ransacking everyone’s Facebook photos. I’ve made the decision that any photo I can find on-line is fair game to use. From personal experience I’m pretty sure I have the legal right to do this, but if anyone objects… don’t make your photos public (dur!)

I’m off to work now. I’d rather not have done the late shift today; there is a session of watching bats at Singleton Lake this evening. I suppose I could have got myself organised and swapped my shifts, but I never got round to it…