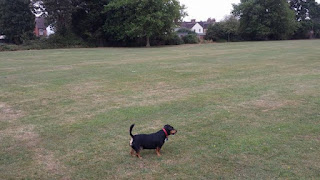 Yesterday was a rather demanding day and with a rather cooler night that we have had recently I slept like a log. It was only a shame that my dog had to start shouting at the dustmen at 6am. I didn’t get back to sleep after that.
Over brekkie I got another year sorted on my Bat-Camp archive. So far the thing seems rather biased toward my recollections simply because no one else has offered any. I then made a start on writing up the minutes of last night’s committee meeting, but soon got bored so I updated the astro club’s website a little instead. There has been a few changes to the program for the next few months; some at rather short notice. And the list of astro events (which was my idea) was now a little out of date. But the website is now current. For a while.

My laptop then decided it wanted to have a little updating session so I took "Furry Face TM" for his morning constitutional. As we walked up the park we met a rather strange child. He insisted on making a fuss on Fudge, and told the world at large that this small dog was his cousin. His mother didn’t seem at all fazed by this announcement; one wonders what goes on in that family.
We also had another run-in with a squirrel in the Chinese garden. At almost exactly the same place where we were on Monday, a squirrel was squeaking abuse at my dog. I wonder if it was the same squirrel. Shortly after that it started raining.
As we walked my phone rang. "Daddy’s Little Angel TM" phoned with a torrent of abuse and profanity because she had left the baby’s car seat in my car. It was as well that I was on a late start today.

I spent a few minute having a look-see on-line, then set off to deliver the car seat. Littlun seemed pleased to see me, but soon got irate when he realised that I was just paying a flying visit and he wasn't having a ride in granddad's blue car. (He calls my car "blue car")
I then carried on to work; as I drove "Women's Hour" was on the radio. That show annoys me. It so often features aggressive man-hating harridans shrieking about how women are brilliant and all men everywhere are conspiring to piss on women's chips by portraying them as bimbos who should stay at home and do housework. And so today the show completely undermined itself by wasting twenty minutes whilst the presenters clucked about the latest clothing fashions.

I stopped off at Morrisons to use the cashpoint machine. I was pleasantly surprised to find I had forty quid in my wallet where I thought I only had a tenner. Result!
I then got petrol, and popped into "Go Outdoors". My shooting jacket has been wearing thin. Looking back the thing is now six years old; I got it from a rather dodgy market at Portland Bill on 3 May 2010 (a diary is a wonderful thing!), so I've had my money's worth out of it.  I've treated myself to a new one - I wonder how long this one will last.
As I left the place the rain started.

I got to work just as the torrential rain started, and I spent most of the day listening to the rain against the window, and watching it out of that same window. I had a wry smile about "Daddy’s Little Angel TM" and "Stormageddon - Bringer of Destruction TM". They'd gone on a day trip to Bodiam Castle. I did tell them that they would get wet, but "Daddy’s Little Angel TM" was insistent that all the attractions were inside. I bet she was cursing...