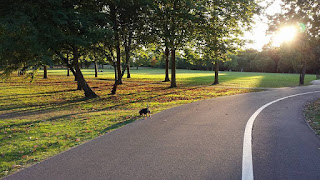 Yesterday was the hottest day of the year and the hottest September day for over a hundred years. Consequently it was a rather hot night; I didn’t sleep as well as I might have done.
Over brekkie I watched Monday’s episode of “Dark Matter”; now the show is coming to the end of the season it is getting rather good. I then checked out the Internet to see what had happened overnight. Not a lot, it would seem.

As I drove to work the pundits on the radio were saying how the House of Commons Foreign Affairs Committee has decided to blame David Cameron for the terrible state of affairs in Libya. Following a military intervention of a few years ago things have gone seriously tits-up in Libya, and David Cameron now seems to be a rather good scapegoat. Isn’t it a sign of our times that people are more interested in assigning blame than solving problems.

And so to work. Today was something of an anniversary. It is thirty-five years to the day since I first started working for the NHS. During that time I’ve worked in a variety of positions in seven different hospitals. I’ve had good times and bad. (And some which even now I gloss over…) I’ve seen some changes, some for the better, some not so. I used to quite enjoy it, and after thirty-five years I can only say that it is not a bad job. There are a *lot* worse things I could be doing.
But I can’t help but wonder “what if”.

I did my bit, and came home. Once home I took my little dog round the park. I took a photo as we walked, and when I went to post it to Facebook (as I do) my phone didn’t choose Viccie Park as the default location. Instead it chose “Pure Pleasure Zone”. It does that a lot. I did a little looking, and it turns out that “Pure Pleasure Zone” is a random house along Jemmett Road. It is listed on Google as a “gift shop”. However it is lacking in any customer reviews. I can’t help but wonder what “gifts” it supplies.

I did notice "Furry Face TM" seemed rather subdued as we walked. I do hope he’s not sickening for anything again.