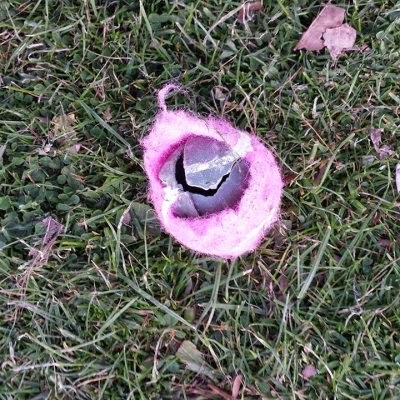 I had a rather late night last night, and after only three and a half hours I was wide awake. That's not as common as once it was, but when it does happen it's a nuisance.

Over a very early brekkie I caught up with some of the stuff on the SkyPlus box. I started off with "Secret Diary of a Call Girl" in which Billie Piper flopped them out. It was quite entertaining if you like that sort of thing. I can't say I'm averse to it.
I then watched "Are You Being Served". In this episode Grace Brothers were having a German-themed week. More and more I find myself watching this show as a social commentary on the times in which it was made rather than for the show itself. Today's episode was rife with glorifying sexual harrassment which today would put the actors into prison. And the show gloried in xenophobia. How times have changed.

I set off to work early; I was on the early shift. As I drove I had a wry smile at the radio. Experts have announced that exercise is no way to lose weight. Apparently they have discovered that no matter how many miles you walk, no matter how many hours you spend in the gym, exercise is no substitute for not eating pies. The cake-hole remains far bigger than the arse-hole.
I've been saying that for years. The only way to successfully lose weight is to be constantly hungry. Thin peple are lucky that for them hunger doesn't hurt.

I got to work; I did my bit. I spent quite a bit of time in a reflective sort of mood. My job's not a bad one; but sometimes I wonder "what if".
I fell into my line of work having abandoned "A" levels half way through after a disastrous set of end of year exams. The reason they were disastrous was not that I was too thick; the reason was that as a lad my every waking hour was spent wrapped up with the Boys Brigade. Sometimes six days a week I'd be doing BB things.
Had I not put quite so much effort into what turned out to be a frankly dangerous religious trap (that I only narrowly escaped) I might have been the company director of bank manager that my best friends at the time ended up being.
Don't get me wrong; I'm not unhappy with my lot. But sometimes I wonder "what if".

At lunchtime I saxed; being somewhat sick of "Moon River" and "Bridge Over Troubled Water" I only gave them a cursory once through in readiness for this evening's lesson. I then had a go at "Mull of Kintyre" and "Yesterday". They were in the song book, and neither seemed to involve too much fannying around with sharps.
I was quite pleased at my first attempts. It's a shame that "Mull of Kintyre" is in my top ten worst songs of all time; but you can't have everything. On the plus side at tonight's sax lsson teacher has assigned me "Yesterday" as part of this week's homework.

I'd gone to the music school via the pet shop to get some new tennis balls for my dog. After the lesson on tonight's dog walk we took a new ball with us; a pink one. My theory that he couldn't see the green balls very well seems to be a good theory. It was obvious he could see the pink ball better. It was only a shame that the pink ball lasted for four minutes before it was ripped open.
As we walked we went past a young family. The father pointed out my dog as being a sausage dog. I had to look away when father was corrected by his small child. The little boy patted my dog on his head and announced "No daddy. He's not a sausage dog. His name is Fudge and he's a Patagonian Tripe-Hound".
I don't remember that child but he clearly remembers me. Or (to be precise) he remembers my dog.

Yesterday I asked my loyal readers to have a look at a magic eye picture. I had this idea that I might get the co-ordinates for a geocache that way. Many thanks to everyon who went cross-eyed on my behalf... It was a good idea with only one drawback... I now have several sets of co-ordinates; all different. I wonder which set is correct...