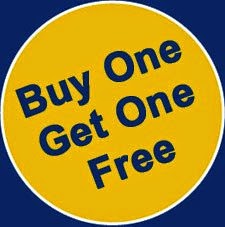 I again woke just before the alarm to find I was cuddling my dog as though he were a teddy bear. This is becoming something of a habit. It's not very macho, is it?

Overnight the bathroom plughole seemed to have unblocked itself. This is one small mercy for which I shall be grateful. On the flip side the drain of the dishwasher has bunged up. God gives with one hand and slaps with the other.
I then had brekkie. As I scoffed it I watched the last episode of "Raised by Wolves"; it's a shame this has come to an end. Today's episode featured music by Sparks which made it especially good.
I then watched an episode of "Are You Being Served" in which Mr Granger had a cob-on because Captain Peacock had been awarded the key to the executive washroom. Quality stuff.

I drove to work; I listened to the radio. There was more news of the terrible loss of life when the boat load of refugees sank in the Mediterranean. Nearly a thousand people died. But I can't help but feel that the Italian government has a point when they say that sending out naval patrols to rescue the refugees just encourages them to make the dangerous journey in the first place. If the political climate is against taking in endless amounts of refugees, the obvious answer is to put a naval blockade on the coast of Libya. Arrest any ships full of migrants; take them back to the coast of Libya and offload the refugees then scuttle the ships.
Or sort out why they are fleeing in the first place.... but that has been tried before.

Former Prime Minister John Major was talking sense. It looks like the upcoming General Election will end up with the Labour party trying to form a minority government. And in order to do so they will be beholden to the Scottish Nationalists which can't be a good thing for anyone but Scottish Nationalists.
People wonder why I am against democracy.... we have a (effectively) minority interest party which represents about five per cent of the UK electorate which realistically has only one policy. There was a referendum about that policy only a few months ago in which the electorate comprehensively rejected it.
So how on Earth are the Scottish Nationalists currently looking set to effectively rule the UK?

I had a wry smile about the revelation that "Which" magazine is issuing a super-complaint to the advertising watchdogs. Its no secret that every supermarket has deals and bargains. Only yesterday the washing powder I bought was at half price. That offer was straight-forward. Other stuff was up for sale at buy-one-get-one-free rates, or three-for-the-price-of-two. I had to exert two seconds of thought to work out whether the offered bargain was actually a saving over other brands. However it is very easy to overlook the fact that I am actually a genius.
"Which" magazine has found that the average shopper is too stupid to work out just how much of a saving is being made in these deals and feels the supermarkets are using these deals to bamboozle the public.
How about rather than banning these deals, why not educate the public?

Bear in mind that in only a few short weeks these same stupid people who can't understand the economics of buy-one-get-one-free get to vote....

I got to work; I did my bit. The day was relatively uneventful; even the sax practicing passed off without incident. Mind you I did see several people having their lunch in their cars as I saxed. I suppose I ruined their lunch breaks.

Being on an early start I had an early finish and so we started our evening walk a little sooner than usual. Those few minutes made all the difference; we didn't see another dog at all on this evening's walk. Tonight I took a ball along and as we walked we played "Fetch" - the game where I throw the ball, my dog barks and runs off in a random direction and I then go and fetch the ball.

Being Tuesday the clans gathered at our house. We played ChromeCast and then I slept through "The Flash". It's a show which started well enough, but doesn't seem to be going anywhere...