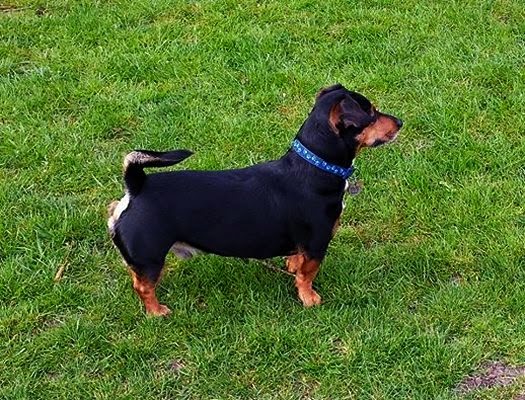 I woke to find my left arm was cold. It was out of the bed and holding my dog's paw. I suppose the only good thing about his is that the dog is still outside the bed. He needs to spend the nights in his basket.

I got up and checked the Internet; not much had happened, so I took "Furry Face TM" for a walk. We did our usual circuit of Bowens Field, Viccie Park and the Co-op field. As we went he bullied a chihuahua and attempted fornication on a nondescript fluffy brown dog. I tried playing "Fetch"; It wasn't a success. It rarely is. Today's variation in the theme involved woofing at the ball when I threw it, then letting me fetch it..

I came home to find "My Boy TM" poised like a coiled spring. I'd co-opted him to help with the heavy lifting. Or not so much "help" as "do it all". With his help we got the job done in less than an hour; on my own I would have taken all morning to fetch and carry.
I then had a visit from some chap canvassing for the Conservative party. He was canvassing for the candidate in the local election rather than the general election. I didn't even know we were having local elections.
I must admit that his main reason for voting for his candidatre was rather weak; apparently she's lived locally for longer than the Labour candidate. He was surprisingly likeable; and we had a good discussion for fifteen minutes. At the end we both agreed that it made a change to be able to seriously disagree without falling out, and we shook hands before he went on his way.
If more people could do that the world would be a better place. Even if they did vote Conservative.

I then went up the road to the corner shop to get a sandwich for lunch. There were several people in the shop chatting about the news that the local church is going to close. The news came from the chap who's uncle is the bell ringer so it is from an unimpeachable source (!)
With lunch scoffed I set about washing and ironing; it is traditional for my days off to do laundry. As I worked I watched Stephen King's "The Stand" which I'd recorded onto the SkyPlus box some time ago. And I then spent a few minutes seriously getting to grips with my new geo-app. I've been getting cross with its shortcomings over the last couple of weeks. Desperate times called for desperate measures so I bit the bullet and read the instructions. I can now do pretty much all that I could (legally) on the old app. Or (to be precise) I know the theory. I shall have to test that theory...