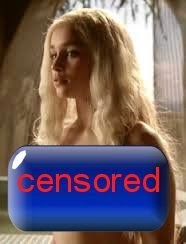 Last night saw the start of the new series of "Game of Thrones". I've watched the previous four seasons in quick succession so at the time I didn't have time to forget what had happened in the previous episodes. But that was some time ago. I can remember that it started slowly, got good and the fourth season dragged somewhat. Last night's first episode of the fifth season was... well, I suppose if I could remember what had happened in the previous four seasons then I might have liked last night's episode rather more than I did.
There's no denying that after twenty minutes I was only watching out of a sense of hoping that "nudey dragon-girl" would get her kit off. In fact she did get her kit off; but "they" did not get "flopped out". Let us hope that this isn't a harbinger of disappointments to come.

I got up, cut myself shaving and then over brekkie watched "Raised by Wolves" inwhich the kids were tricked into watching war films by being told that they were just like Star Wars. Hitler was Darth Vader and Churchill was R2D2, and the fact that there was no Harrison Ford was a sad lesson in life. As a reward for watching war films the kids were allowed to watch Watership Down and they got into an argument about which one was the sexiest rabbit.

I set off to work. I took the time to wipe the condensation from the windows of my car, then was nearly run off the road by some elderly fool who had not. He wound down his window and was very apologetic about the matter until I suggested he wiped his windows so he could see out of them.
He then got rather abusive.

As I drove there was an interview with the country's only Green Party MP. To hear her speak was interesting. In broad principle she sounded just like the Labour Party of the early 1980s who (at the time) seemed to be making great effort to make themselves unelectable.
Apparently the Green Party is currently going through an upsurge in popularity and in the opinion polls. Listening to the drivel spouted this morning I can't help but wonder why. The most convincing reason I've ever heard anyone give for voting Green is that they are a friend of the local candidate.

I got to work, did a little, then at lunchtime had a sax practice in the car park as I do. I feel my tunes are recognisable, but then I know what they are supposed to be. I wonder if all the people who also spend their lunch breaks lurking in the car park recognise the tunes. Personally if there was some bald twit strangling a saxophone in a car park I'd park elsewhere. But there seem to be plenty of people who find me fascinating to watch. I suppose it livens up an otherwise dull part of the day.
Mind you today of of those people came over and told me that she likes listening to my music every lunchtime, and told me that I was an inspiration.
That was nice.

Once home I took "Furry Face TM" for his walk. Some of hiis walks are dull; others not so. Today's was quite fun really. Despite a bad start in which I mistakenly threw his ball in the river (and watched it sail away) things soon perked up with the advent of a gaggle of "Yummy Mummies" all of whom were wearing little more than a smile, and all of whom wanted to fuss my dog. After this we met the mad person dancing in the middle of the park to the strange music in his head.

And with "er indoors TM" off flogging candles I caught up on the backlog of recorded episodes of "Poldark". I think I shall have an early night now... feeling a bit tired...