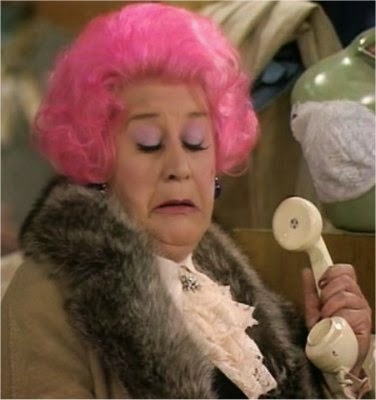 I wasn't feeling quite one hundred per cent last night. Perhaps that's why I slept right through until the alarm this morning. I woke, abluted and used the last three slices of bread; two for sandwiches and only one for toast. A hungry brekkie, but probably not as hungry as ‘er indoors TM   would have had after me.
As I scoffed toast I watched telly. I'd recorded episodes of "Are You Being Served" onto the SkyPlus box; during the week BBC2 has been having a Lame-o-thon in the afternoons. You can't beat rubbish 1970s sit-coms. Mrs Slocombe had been having problems; her corsets had been down all week (woof!).

I set off to work; as I drove the news wasn't especially inspiring. The pundits were broadcasting an election special from Thetford near Cambridge (of all places) where there seems to be issues with immigrant workers. There was an interesting interview with potential UKIP voters. The locals are all for UKIP; wanting to send them all back on the next banana boat. And if the next banana boat doesn't come soon enough there were plenty prepared to pay for one out of their own pocket.
There was then an interview with a local grower of asparagus who employs loads of immigrant workers for the simple reason that the locals do not want to work on his farm. As he said, what is he supposed to do when he advertises a job and no one applies? There were then interviews with other local employers who said much the same.

The pundits then totally contradicted themselves by saying on the one hand that the Tories smear campaign against the Labour party leader has actually backfired because the masses don't like name calling which is putting the Labour party ahead in the polls, and then on the other hand they went on to say that the Labour party faces wipeout in Scotland.
The whole Scotland thing amazes me. How can the Scottish nationalists be doing so well having been comprehensively defeated in the recent independence referendum?

I got to work, did the bare minimum, and finding myself bored with my current sax homework I had a crack at “Don’t Cry For Me Argentina” which came out a lot better than it might have done.

And with  ‘er indoors TM  off flogging candles I’m about to catch on on TV viewing. I’m behind with “Gotham”, “Extant” and “Poldark”. I’ve also got shirts to iron and a new ironing board on which to iron them.
Never a dull moment…
Posted by Manky Badger at 7:50 pm