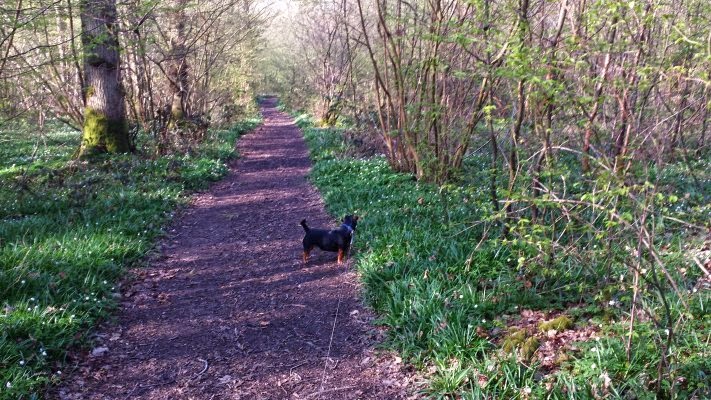 After a reasonable night's sleep I got up and thought I'd give myself a haircut. For about fifteen years I've been using a set of Wahl hair trimmers but they finally gave up the ghost, and for Christmas "er indoors TM" got me a Babylis hair trimmer. At the risk of appearing ungrateful I hate the thing. It doesn't actually trim or cut anything, it just pulls the hair out. It hurts to use it; it's had a fair trial and if any of my loyal readers want the thing, it's yours.

Over brekkie I saw a new geocache had gone live near Appledore. They don't seem to appear as regularly locally as once they did so I thought I'd chase the First to Find. However being unprepared to charge out of the house at a moment's notice and then drive at breaknecck speed meant I was (yet again) beaten to the FTF by a few minutes.
Most (pretty much all) geocaches within fifteen miles of home are found within an hour of publication by the same team who seem happy to drop everything and run out of the house the very second a notificiation email appears. When I first started chasing the FTFs two years ago there were at least half a dozen people who would also chase after them. There was quite the element of the fun of the hunt. Now everyone else has given up chasing them and I too don't think I will bother any more.

As I drove to work for the late shft there was an interview on the radio about a chap who was composing music for Charlie Chaplin movies which are apparently having something of a resurgence.
I've never like Charlie Chaplin films; I've never liked Charlie Chaplin. Apparently over one hundred years ago he was the best of friends with a cousin of my grandmother. They were all living in the east end of London; all *very* poor. The young Chaplin was helped out and looked after by so many people. But when opportunity knocked he immediately turned his back on them all.
I'd like to think that if I were in his position I wouldn't. I wonder...

I got to work; I did my bit. At lunch time I went out to the car park to do my saxing. As I set up I saw there was a chap sitting on the car park's kerb about twenty yards from me. He looked rather morosse. As I started off with "Bridge Over Troubled Water" so he held his head in his hands. And when I played "Moon River" he started crying.
I cut my practice short and went inside. Quickly.