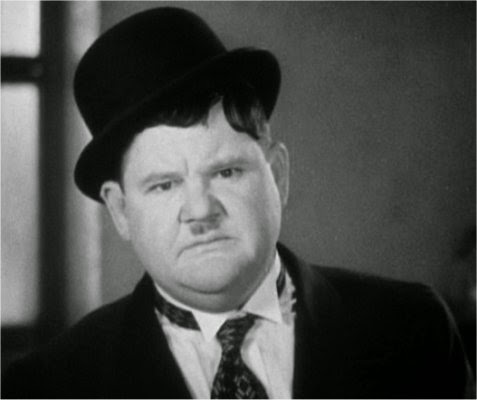 What with an afternoon spent building fences on Saturday and a twelve mile hike yesterday I suppose it's hardly surprising that I ached (just a little) when I woke this morning.
My dog must have been aching too; he didn't stir from his basket as I scoffed my brekkie. As I scoffed I watched a vintage episode of Dad's Army in which our heroes were given the job of guarding telephone lines. It strck me as a rather made-up scenario; did the army *really* guard miles of phone lines during the war?
In the end Private Pike saved the day with his porridge. As one does.

As I drove to work I had the radio on. I heard the news that another classic is returning. (Sort of). The cinema at the Bluewater shopping centre is having an evening of Laurel and Hardy films in June to celebrate the 125th anniversary of Stan Laurel's birth. I'd be tempted to go up to it if I didn't have all their films on DVD.
I've always said that Oliver Hardy was the greatest comedian who ever lived.
I also heard that the Prime Minister is ecstatic that five thousand small businesses have signed a letter saying how wonderful the coalition government has been.
The pundits presenting this news then pointed out that in fact some five point two million small businesses were actually eligible to sign that letter. Five thousand signatures sounds really good; an uptake of one tenth of one per cent isn't quite so impressive.
I got to work and did some. At lunchtime I saxed. "Yesterday" seems to be going quite well. However I do seem to get out of breath towards the final tum-te-tum bits. I shall persevere.
And with work done I did a little shopping. Firstly to the vastly overpriced "Go Outdoors" for waterproofing for my walking shoes. And then to Argos for new hair trimmers.
A week or so ago I mentioned that Babylis hair trimmers don't cut; they just pull the hair out. Today I got a set of Wahl clippers. Reduced from forty quid to a tenner they did the job perfectly..

As I drove home there was a bunch of UKIP supporters waving at cars as they drove through Kennington. They all smiled sweetly at me; I gave them all (collectively, and individually) the two fingers.
If they are ardent UKIP supporters they are either incredibly stupid, or incredibly nasty. By their looks I think these ones were stupid ones.

I then took "Furry Face TM" for a walk round the park. The second pink tennis ball has lasted to its third day. And other than that there was really not a lot of note on our walk this evening; probably for the best.

With "er indoors TM" off bowling I settled myself in fromt of the telly for my Monday fix. "Gotham" and then "Game of Thrones". Apparently the actress who plays Nudey Dragon-Girl has become so famous she's now refusing to get her kit off any more.
There's no denying the show has suddenly lost a lot of its attraction... but what are hashtags for if not to bandy. #getyourkitoffdaenerystargaryen