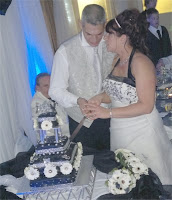 With no reason to be up early we had a bit of a lie-in, and then I got out my shears and gave my head the once-over before having a bit of brekkie. I noticed the room was dark, so I opened the curtains. Or that is I tried to open the curtains: I couldn't get to the window because of all the clutter in the way. Much of which was other people's clutter. Amongst the clutter there is a tent which has been under my window for a couple of years now. It's not my tent: we seem to have brought it home from one of our camping trips, and someone or other seems to be content that I'm looking after it. If anyone thinks I'm looking after their tent could they please reclaim it as it is seriously in my way.

I had the Saturday morning weigh-in. What with the holidays I've put on three pounds this week. I suppose that's only to be expected, but I must admit that I was rather disappointed about it.

We then turned on the telly and spent a few hours watching episodes of "Come Dine With Me" which we'd recorded onto the Sky-Plus box over the last few weeks and months. If you've never seen the program, it's well worth giving a go: the show takes four or five random people all of which (over the course of a week) have to put on a dinner party for the others. Some of the people are decent bods, others are complete planks, others are utterly arrogant. Sometimes they all get on really well, sometimes it's arguments all the way. I suspect that like most reality TV it's all rather staged, but it passes the time whilst we play on-line scrabble.

With time passed we collected "My Boy TM" and his entourage (minus Fudge) and set off to Westfield for my sister-in-law's wedding. I say "wedding" - the actual wedding was during the morning: we were going to a blessing of the wedding in the local church. It seemed somewhat odd to me that a wedding be done in a registry office, and then blessed in church. Why not just have it done in the church in the first place? (But what do I know?)
The service was somewhat "Typical Church of England" in that it was rather unique. When you go to a Catholic or a Methodist or a Baptist church, generally you know what you are going to get. With the C of E these days you seem to get anything from several hours of hypocrisy in sub zero temperatures through to false bonhomie happy clappy, and everything in between. I can;t help but feel that the C of E needs to choose which area of the religion market it is aiming for, and stop trying to cover all of the bases.
But the service passed off rather well, I thought. There was a dodgy five minutes when the vicar seemed to imply that she was unaware that both protagonists had been married before, but I think that we got away with it, and after half an hour we set off to the bunfight.

The wedding reception was at the rather posh Leeford Place, and after half an hour of mingling we sat down for dinner. In a novel break with tradition speeches were made before we ate, and were well received. The food was good - I shouldn't have gone for a second helping of the curry; it didn't sit well and gave me gyp for the rest of the evening.
And then torment - a disco. I hate, loathe and despise discos. They are far too loud, noisy and intrusive. But everyone else seems to like them (so what do I know?). The assorted children and teenagers seemed to like the disco, and after meeting one of my loyal readers (hello Dickie - good to meet you!) midnight came oh-so-quickly. Auld Lang Syne was swiftly followed by fireworks. And then I realised that I am getting old when I found myself grumbling about how tiresome drunk teenagers are. I stopped myself whinging, put on a smile, and consoled myself with the thought of the copious amounts of vom said children would be generating on their journeys home. (That would be nice for someone...)

And talking of journeys home, we then made ours. I wasn't entirely sure of the quickest way home, but I was sure that it wasn't the way my sat-nav would have me believe. So "er indoors TM" activated her sat-nav which generated different (but equally implausible) instructions. But having found Broad Oak I knew the way home from there, even if sat-nav did keep trying to send us many miles out of our way to Rye.
Having dropped off the family, we eventually got home shortly after 2am, and then spent a while mucking about on the computer.
I must admit I quite missed our traditional New Year celebration, (we usually do a Spanish New Year), but as family events go, tonight was rather good There's photos of what happened here.. Must do the family thing more often...