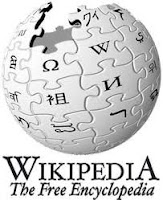 This morning as I started my car I noticed that the temperature was a full ten degrees warmer than it was yesterday. It was plus five rather than minus five, which makes quite a difference. And that would be thirty degrees warmer that that which some of my loyal readers are currently experiencing. (Waves in the general direction of the Great Lakes and gloats!)

Today the font of all knowledge, Wikipedia, is shut down. They have done this in protest against the "Stop Online Piracy Act" - something which is possibly going to enter American law (and probably British law too eventually). Apparently the main thrust of the legislation is that it will put the burden to police user-contributed material on website owners.
On a personal basis I don't think that's unreasonable - I realise that I can't just blag someone else's efforts and blog it as my own. There would arguably be a grey area over some of the pictures I use for blog posts: clip art and stuff I find on-line I usually re-colour so's I've had (at least) some input into the creation of the picture. Very occasionally I might use a photo I find on-line. But if the photo comes with any copyright disclaimers, then I won't touch it.
And the same applies to any of the other websites I run. I am responsible for what I put on the Internet.

And therein lies the problem that Wikipedia faces. It's summed up in the sentence "I am responsible for what I put on the Internet". I don't allow anyone else publishing rights on any webspace that I use. Wikipedia does: by it's very nature absolutely anyone can publish absolutely anything on Wikipedia. And so, for all that the vast majority of Wikipedians contribute properly and sensibly, there is nothing stopping the rogue element publishing foolishly or maliciously. Or from blagging someone else's work (piracy).
At the moment I'm not sure who is responsible for any copyright infringements that appear on Wikipedia. But should the Stop Online Piracy Act become law, then those who own Wikipedia would become responsible for the (possibly) illegal acts of others. Wikipedia have got the hump - they claim that the Stop Online Piracy Act will "fatally damage the free and open Internet". Will it? I don't really know. I suspect the Stop Online Piracy Act was never drawn up with Wikipedia in mind.
One possible answer might be for Wikipedia to reconsider who it allows to edit their articles: after all I am one of the resident experts who contributed to the pages on "Upstairs Downstairs" and "The Treacle People". However for all that this idea might work in principle, in practice the licensing of thousands of Wikipedians would probably prove impractical.

Will Wikipedia survive the legislation? I expect so. After all, it's not Wikipedia that the legislation is supposed to be targeting. And is anyone going to prosecute Wikipedia for any alleged breaches of copyright? I suspect that over the next few weeks a button will appear on every page of Wikipedia allowing people to report supposed infringements of the Stop Online Piracy Act, and an army of Wikipedians will spend their time painstakingly rewording the article generating the complaints. After all, armies of Wikipedians have painstakingly reworded every contribution I've ever made to Wikipedia for no apparent reason. The Stop Online Piracy Act might just give them something to do...