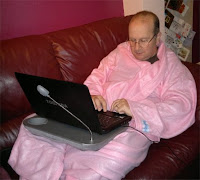 There was an amazing article on the local news today - a Kent woman is being prosecuted. Whilst eating her lunch she threw some of her sandwich to the birds. She's now being prosecuted for littering. She was on the telly loudly boasting that she could be taken to the highest court in the land: she wouldn't pay any fines.
There was a time when I would have been equally defiant: these days if I were in in a similar position I would keep my trap shut.
The same news told of Bob Holness having died today. The news article mentioned that he lived in Pinner: I always thought he lived locally: back in the day he used to accompany Santa to switch on the Christmas lights in Ashford every year.
Did you know that he was the first person to ever play the part of James Bond? He did it on a very early radio broadcast.

As I was leaving work this evening my mobile beeped: the Rear Admiral was asking about dates of kite festivals. I really need to organise myself on that front. The Kite festival at Teston isn't happening in June this year, and (in all honesty) I don't want to do the August one if "er indoors TM" isn't going to be there. The kite festival in Brighton would seem to be back to it's traditional date, but in this new world order of austerity, I might not be able to afford the weekend away. Which would be a shame.

I got home and then spent two hours ironing. Dull. I really should stop wearing shirts to work. A lot of my colleagues wear T-shirts and polo shirts. Perhaps I should do the same? Eventually "er indoors TM" came home with a pressie for me.
For some time I've been saying that I'd like a Snuggie: they look so good on the adverts. "er indoors TM" had bought me a Snuggie. I must admit that at first sight I was disappointed. The adverts led me to believe the things were a form of serious thermal insulation. But what I had looked very thin and flimsy. But I gave it a go, and for all that it does look very thin and flimsy, it's surprisingly warm. I'm quite pleased with it....