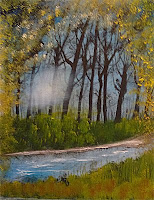 A bit of a lie-in, but I'd leapt into action before 10am. A quick shave, then I had a go at yesterday's washing up and had some brekkie. Whilst scoffing we turned the telly on and watched "Man vs Food". In today's episode our hero was faced with a pie the size of a dustbin lid, and had an hour in which to devour it. Which he eventually did.
But once that was over I couldn't find a single program worth watching on the telly. So we cleared some more space from the Sky-Plus box by watching some of the stuff that we'd recorded during the week. Now that "Charlie's Angels" has been cancelled I seem to have decided that I like the show.

It would have been good to have done something with the day. But we had no real need to go shopping, and for all that it was a bright day, it was a cold day so going out was a bit of a non-starter. With very little else to do, I got my paints out and got artistic. Today I tried something different. The painting (pictured above) was based on something that I saw on the Bob Ross show last week. I started off by painting the background trees in acrylic and letting them dry before adding the foreground bushes, river and trees. The finished painting is 10 inches by 16 inches and I've managed to sell it for a tenner.
However there's no denying that Badger Original Landscapes hasn't been the money-spinner I was hoping it would turn out to be.

And then, just to be contradictory, we went out. "er indoors TM" had found a bargain from someone who was moving house. A real bargain *if* we could pick it up within the hour. So we popped up to Kennington, collected the bargain, and came home via Lidls (it was Sunday after all). Lidls had quite a bit of art stuff for sale, but nothing from the Bob Ross range (I was sorry to see). Mind you, I wouldn't expect to see Bob Ross stuff in Lidls.
The Great Unwashed wound me up in Lidls. Am I the only member of the human race who actually looks where he's walking? People were blindly blundering about the shop; bouncing off of each other's trollies, the shelves, the freezers. Trying to navigate between their random wanderings was nigh on impossible.

Back home: it's become something of a tradition to switch on the Sky Atlantic channel on a Sunday afternoon and watch back-to-back episodes of Star Trek: Voyager. And that's what I did. And after tea with "er indoors TM" gone bowling I carried on watching Star Trek, and through the wonders of lap-top computers I did some job hunting. I applied for half a dozen repping jobs. Something might come from the applications - one lives in hope...