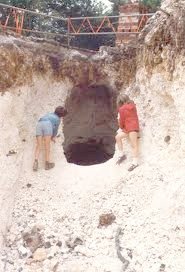 Another day with no more fatalities in the pond. Thank heavens for small mercies. Regular readers might recall that when I first mentioned my problems with my pond I also mentioned a friend's cat who'd had an altercation with a car. The moggie is still under the vet, and the most recent update is hopeful.

Yesterday I was rather disparaging about the entire concept of arky-ologee. Tonight was a meeting of the arky-ologee club. I'd not slept well last night, and so dozing through a dull talk wasn't an appealing option. But (against my better judgement) I went along to the club. It didn't start well. The chair-lady started off her welcoming speech, and (as is her way) she rambled on somewhat. Maybe one person in five in the audience had the good grace to shut up and listen to her: most continued their noisy conversations.
I was about to actually tell people to shut up when the main speaker started. Fortunately people shut up for that. And things picked up. The talk was good. It was ostensibly about dene holes; holes dug around Kent for mining chalk. They were dug all over the place over the last five hundred years, and when they were finished they weren't filled in with much care. And so now they periodically appear when people's back gardens fall into them.
Some dene holes are bigger than others. Some are just a hole; others are networks of caves. I started getting rather excited at the thought of cave networks. Maybe investigating some of these could be a project for over the summer.

Whilst at the arky-ologee club I noticed that the Lenham Arts and Crafts society were exhibiting their members' paintings on the walls of the room we met in. All of the paintings were up for sale; none were up for less than fifty quid, most (in all honesty) weren't as good as the seascape I did on Monday. Perhaps I might find a local Arts and Crafts society and see if I can't tout my paintings through them...