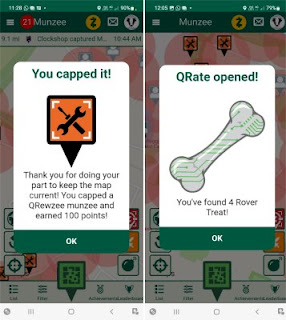 With no toaster or oven or any way to warm bread at all, I thought I might have cereal for brekkie. With the remans of the old kitchen forced into a very crowded living room I managed to find a bowl and a spoon. The cereals themselves eventually came to light behind the new kitchen units… I could see them, but there was absolutely no way of getting to them, so I made do with a cup of coffee and once I’d had a go at the kitchen window hinges with some WD40 I cleared up dog spew. “er indoors TM” got some new dog food yesterday. Those hounds that didn’t have the trots had blown.

The joys of dogs…

Having cleared up pretty much all of the various canine outpourings that I could find (yuk!) I took Pogo and Treacle down to the woods for a walk. We came out of the house to find the car which has been parked outside for five weeks (literally hadn’t moved for five weeks) was gone. Result! Parking is always at a premium round our way.

As we drove the pundits on the radio were talking about yesterday’s by-elections. The conservatives had lost a lot of seats, but there was no clear winner between the Labour party, the dribbling democraps and the Greens (who are slowly but surely becoming a force to be reckoned with). It would seem that the country has had enough of the Tories, but isn’t sure about who to replace them with, and all the time the anti-Tory vote is split, there is no effective opposition.

We got to the woods, and bearing in mind that the last two trips to the woods have been followed with dog bath time, I planned a route avoiding as many swamps as I could. There was a minor hiccup when Treacle managed to jump a fence and get into a field where she shouldn’t be, but a triumph for whistle training soon had her back with me.

We had a minor episode when we were about to leave. I opened the boot of the car as I do and the dogs jumped in as they do. I blew the whistle and gave them treats… and a passing idiot loudly announced to his dogs that it was treat time and brought them over in the hope of treats. Pogo and Treacle can barely tolerate another dog of our wolf-pack getting anything; let alone some stranger. Both of my dogs flew from the boot and chased the intruders away. The passing idiot was rather taken aback. It was rather sad really; he honestly thought that my dogs would be only too happy to share. But he openly admitted that his dogs certainly wouldn’t share treats with strange dogs.

I certainly do attract them, don’t I?

We came home and didn’t need a bath which was a result. Leaving the dogs with “er indoors TM” I set off in the general direction of work. As I drove up the motorway I listened to “Women’s Hour” in frank amazement. It is no secret that women are biologically equipped to have babies. Not only was this (apparently!) devised by a man, the fact that there are no artificial wombs was also down to men. And there was then a fifteen minute “what-if” session in which some perfect world was imagined having been brought about by artificial wombs. The fact that these are purely in the realms of science-fiction didn’t seem to be a stumbling block for planning a world with them, and the fact that artificial wombs are purely in the realms of science-fiction was somehow a male plot.

“Women’s Hour” amazes me. Whenever I listen to it  can’t get over the amount of vitriol spewed at all men.

I thought I’d get some petrol, and so joined the queue. Queues for petrol? Had the stupidity of panic buying started again? Apparently not. Apparently Friday morning is always busy at the petrol pumps. I shall remember that.

And having got to work early I then Munz-ed like a thing possessed. Having planned to cap twenty Qrewzees I got to open two Qrates as well. Result.

And so to work for what was the busiest late shift for some time… I quite like the late start because I can get all sorts of things done in the morning and have all sorts of adventures… but the late finish isn’t so good.