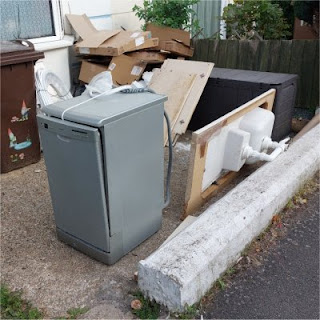 With no kitchen, last week before the night shift I went to McDonalds and was sadly disappointed. So still with no kitchen. last night I thought I might have a sandwich before work. I stopped off at the Larkfield Sainsburys, put a sandwich and *loads* of other stuff into my trolley and queued up. And waited. And waited.  As always there were nowhere near enough tills for the amount of customers... but that is a rant for another time. When I eventually came to pay I was told that the sandwich I wanted had been "withdrawn from sale". Other customers were finding the same. None of us were offered any explanation or alternative, and all the assistant could do was give a rather sickly smile as she clearly had no idea what else to do. All she could say was that the sandwich had been "withdrawn from sale", and she repeated that like a stuck record. I told her that if an item is "withdrawn from sale" it should not be on the shelves, and (to be fair to her) I also told her it was not fair to have untrained staff dealing with this sort  of problem. Her smile didn't falter or flicker... she really was like a robot which had been programmed to grimace when events exceeded its capabilities.

Leaving twenty quid's worth of other stuff at the till I walked off (as did the woman on the next till), and drove up to Morrisons which (in all honesty) wasn't much better. I got what I wanted for overnight. I didn't get the red wine though; the very same stuff had been two quid cheaper in Sainsburys.

As I came to pay some officious busybody in a hi-his jacket bellowed in my ear that we should all get a move on as the store was closing in five minutes. He then bellowed at a passing assistant that the fruit at the checkout should be reduced in price to ten pence. I said I'd have some of that for ten pence, but I was just about to pay...

I had to be quite rude before the woman gave up on the idea of selling me cheap fruit. Why do I attract these idiots?

I got to work where I scoffed a late tea. The sandwich wasn't all that good; certainly wasn't worth the aggro I'd been through to get it.

During breaks between work I did what I often do on the night shift. I read old blog entries. Last night I was reading about what I was getting up to in early 2008. Fourteen years ago I was a very active scout leader. I was a leading light in the fledgling astronomy club. I was a regular at the archaeology club, and ran a weekly Star Trek fan club. I would regularly do archery, go camping and attend beer festivals. And spend an inordinate amount of time in NeverWinter.

All whilst having a far more demanding job than I have now (much as I prefer my current job!).

There is so much that I used to do that I don't any more. How did I ever have time for it all?

Mind you, back then we had a functional kitchen. It was with a sense of "FFS" that I looked at the now-redundant old kitchen sink and dishwasher (in the front garden) as I came home this morning.

I then spent much of the day feeling like a zombie… Am I too old for night work?
Posted by Manky Badger at 4:38 pm