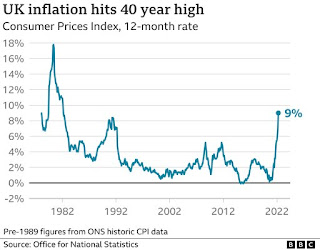 And as I waited for the puppies to do their thing she did this three or four more times.

She does make me laugh; who does she think wants to get in to her house. And bearing in mind that there is impenetrable overgrowth all over the high fences round her garden how does she think anyone can get to her back door?

Whilst I was out listening to the sound or back doors being continually locked and unlocked I had a look at the pond. The fish which nearly had his chips yesterday seemed to be OK; swimming about with all his pals.

Being unable to find either kettle or toaster I thought I'd get brekkie at work. I walked the epic mission to where I'd left my car (two streets away). As I walked I watched an idiot jogger. With those huge headphones that block out all sound other than what he was listening to I watched him run right in front of a car without realising that he'd done so, and a few seconds later he ran out in front of my car. I blasted my hooter (which he heard) and he seemed surprised to realise he was in the middle of the road inches from having been run over.

I drove up some rather busy roads this morning. As I drove the pundits on the radio were rather depressing. With the Ukrainian situation worsening for both sides and inflation having reached a forty-year high, the world seemed particularly bleak today. Perhaps that was why I struggled to get any enthusiasm for work today. Despite finding a rather interesting and particularly obscure case (a sub-group of blood group “A”), for much of the day I really couldn't be arsed. I don’t dislike my job, but I’m getting more and more fed up with having to do it. If inflation wasn’t at a lifetime’s high I would have retired this morning.

There was something of a minor victory as I came home; I was glad to see the coast-bound bit of "Operation Brock" was in use. Last night it wasn't and I'd had to drive along the bit that the lorries use... at only thirty miles per hour for twenty miles. This evening I could go at fifty miles per hour. Only twenty miles an hour slower than I might have done, and I was only quarter of an hour later home than I might have been.

With the kitchen getting ever closer to completion “er indoors TM” was able to use it to incinerate a bit of scran for our tea. There’s no denying that the new oven is a tad keen. I expect she’ll get the hang of it. I hope so; if I have to get the hang of it, I shall put the thing on eBay and go up the KFC.

I feel surprisingly worn out… I wonder why. It’s not like I’ve done much today really…