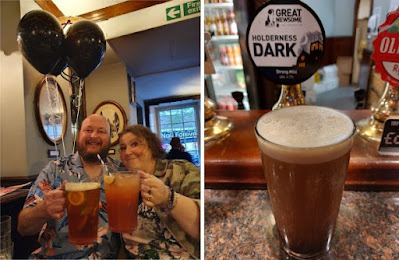 I don't mind taking the puppies into the garden at far-too-early o'clock to do their business. But I'd rather that all I had to do was stand and wait whist they did their business. I'd rather not have to watch Bailey "like a pork" (to coin a phrase) to check she doesn't eat any turds she might find, and I'm not at all keen on trying to get the turds she is trying to eat out of her mouth.

The poor little puppy really didn't understand why I wasn't keen on "dog kisses" as I watched "Orange is the New Black" this morning.

The monthly Munzee Clan War started today. As part of this month's challenge I have to Munz forty "Points of Interest". Don't be fooled by the name - they are dull, but I managed to Munz a quarter of the monthly requirement before setting off up the motorway to work.

As I drove my piss boiled. With petrol prices going through the roof, and my combined leccie and gas bill up over eighty quid a month on what they were a few months ago, the fuel giant BP has announced record-breaking profits. The pundits on the radio wheeled on the leader of the dribbling democraps who said that if the government slaps windfall taxes on BP (in a fit of pique) then BP will probably stop investing in the UK. He's probably got a point. This is sadly a practical demonstration of "market forces" in which those with loads of money get loads more, and those without end up without even a pot in which to piss.

And there was a lot of talk about how the American supreme court is looking to outlaw abortions in the USA.

Pro-life campaigners annoy me. How many are really sincere in their beliefs, and how many are blindly following the teachings of a church which has told them what to think for their entire life. I was reminded of someone with whom I used to work who now is an internationally famous pro-life campaigner. A very intelligent woman all the time the local priest wasn't around. But when he was about, she blindly followed any old claptrap he spouted, no matter how patently ridiculous. I looked her up on the Internet today. I won't give a link, but describing herself on her Twitter profile as “passionately pro-life, pro-marriage & pro-family” she is clearly drawing a veil over the husband and child she left in Africa twenty years ago.

I listened to the radio for rather longer than usual this morning. A lorry had had a blow-out on the M20, and bearing in mind that only half of the M20 is in use these days it doesn't take much to stop the thing dead in its tracks. I crawled at a snail's pace for over five miles as queues of traffic tried to get past it.

I had planned on a Munzee mission near work before I started, but all the time I would have spent scanning bar codes stuck to lamp posts was wasted queuing up on the motorway.

Work was much as it ever is, but being on an early shift was good. With no broken-down lorries in the way I got home far quicker than I got to work, and rather than going in to the house I spent half an hour loading up much of the wreckage of the kitchen into the back of my car. I rather thought that the dogs would be barking through the window at me, but they were rather preoccupied with the nice man who was doing “New Kitchen Phase I”.

“New Kitchen Phase I” involved replacing the rather naff glass partition between the living room and kitchen. Yesterday I realised it still had the masking tape on it from where I’d painted round it maybe twenty years ago.

We settled the dogs and went up to The County Hotel where several of us met up for a meal and a catch-up. It was good to meet up with friends we’d nod seen for months (years), and four pints of mild slipped down far too easily…