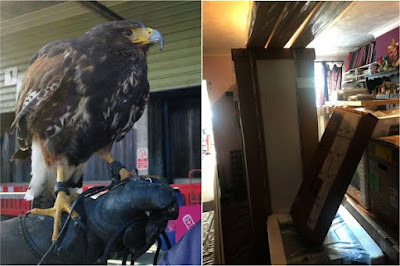 I wouldn’t say that last night was one of the worse night shifts, but it is always good to see the relief arrive. I set off homewards down the motorway listening to the pundits on the radio spewing their drivel. And drivel it was. I listened to the “Thought for the Day” and seriously considered writing to the speaker to formally apologize for being a white man.

Whilst historically there has been a lot of very bad things committed by various groups of people against various other groups, I didn’t kill Stephen Lawrence, and neither did millions of other white middle-aged men. The woman speaking on the radio this morning was seriously implying that every white middle aged man should feel responsible for every racist act ever committed.

I drove to the tip and found someone different on the gate. Unlike yesterday there was no “jobsworth attitude” and I soon unloaded the last of the kitchen rubbish. As I unloaded I saw the nice man with the hawk was at the tip. The hawk (and the nice man) visits several times each week to keep the seagulls and other vermin away. The nice man saw my Ringwood Brewery hoodie, and thought I worked there. Apparently he likes their beers, often stays with friends near the brewery, and had no idea that the brewery had a shop.

With rubbish unloaded I put the car seats back, re-installed the dog-proofing around the boot, then drove home to find the new kitchen had arrived. It had been delivered before I’d finished the night shift. Mind  you that’s “delivered”; not “installed”. The bits of the new kitchen are all filling one end of the living room, and all of the contents of the living room have been doubled up at the other end. I rolled my eyes at the mess and went to bed.

I woke after three hours when my CPAP machine stopped working. It stopped with everything else when the nice man doing the kitchen had to pull the power for some reason or other.

I came downstairs to find that the living room was still rammed wall-to-wall with all sorts of stuff… apparently as well as our new cooker we’ve got one for someone in Bexhill as well. Having that taken away tomorrow will free up some space. But seeing how tight we were for space I took the bigger dogs out to somewhere where it wasn’t quite so claustrophobic.

We went to Orlestone woods where we encountered an odd fellow. As we walked we caught up with some chap and his dog… I say “caught up” – we got to within thirty yards of him when he looked back at us in utter panic, then ran on. And we caught up with him again, and he again ran on. And so it continued until he eventually took one turning and we took another.

As we walked we couldn’t help but notice that the squirrels were out in force. I lost count of the amount of  the squirrine menace that was chased up trees. It was a shame that both dogs had to run through the swamp several times, but there it was.

With walk walked we had a bath (well, some of us did), and then we had another instalment  of “Dog School” in the garden. Treacle and Pogo didn’t seem very fussed about taking part; they really did exude an aura of “been there, done that”, but little Morgan seems to have mastered “sit”. Little Bailey doesn’t seem to have a clue, but she’ll get the hang of it eventually… or she won’t.

With no kitchen, “er indoors TM” popped up the road to the kebab shop, and we had a rather good dinner, marred only by Treacle (of all dogs) screaming for scraps. I wish she wouldn’t…