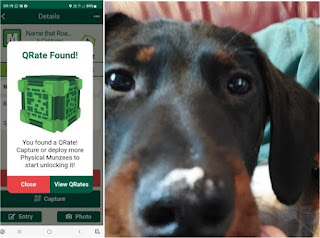 There’s no denying that the fourth pint of mild last might was something of a mistake. The alarm woke me at seven o’clock this morning and I came down to find the puppies were awake. By judiciously following them outside with a trowel I managed to avoid any poops getting eaten this morning.

Leaving “er indoors TM” with the dogs I drove round to the tip and joined the queue. As I waited I deployed Munzees and listened to the pundits on the radio interviewing the Environment Secretary who seemed to treat every question he was asked with utter contempt. When asked about some old woman who goes on endless bus journeys (as the bus is warmer than her cold house) the idiot just said that the Prime Minister was right when he said the old woman should be grateful for her bus pass.

Having delayed everyone needlessly (being second in the queue there were quite a few cars behind me) we all finally got to unload our rubbish.

It took far longer to unload this morning than it had taken to load up last night, and I drove back home where I filled the car with more rubbish for tomorrow’s tip run.

I then took the dogs to the park for a little walk. Our walk was somewhat plagued by cyclists, as had my earlier driving been. Cyclists have always been something of a law unto themselves, but today they were flying down the pavements, shooting through red traffic lights, wobbling about on the wrong side of the road… they really do seem to do what they like when they like.

We wandered through the park, and then went on round some of the roads nearby on something of a Munzee mission, capping Greenies (as one does) in the hope of finding a Qrate. I found two. I also found a nutter in a mobility scooter who followed us shouting “chicken chicken chicken” at the dogs for no reason I could fathom.

We eventually shook hm off by going down an alley too narrow for his scooter.

With walk walked we all then had a little sleep on the sofa until the nice man arrived to carry on sorting the kitchen. Having woofed at him a little, the dogs then ignored him mostly. The puppies did steal some masking stuff he was using, and Morgan did get a white nose (somehow) but they eventually got bored with him and went back to sleep.

After an hour or so the dogs woke and were fractious, so whilst the nice man sealed up the kitchen and made loads of dust I took the dogs into the garden where we did a few minutes of “dog school” in which Pogo and Treacle showed Morgan and Bailey how to do “sit”. Morgan had a fair stab at it but if this had been a proper school, Bailey would have been wearing a dunce’s cap.

“er indoors TM” had to go to the office for the morning; she came home at lunch time and I went to bed for three hours, waking to find that one of the puppies had crapped on “er indoors TM”’s phone.

Going to the night shift in a few minutes will be a blessed relief ...
Posted by Manky Badger at 5:33 pm