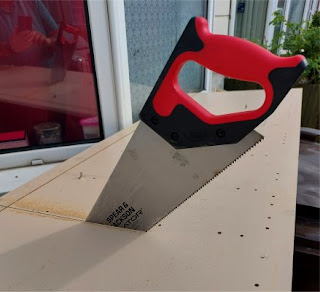 I woke with something of a backache, so got up and quietly crept to the bathroom so as not to disturb the puppies, even though they would seem to sleep though anything. Once shaved (without lacerating myself) I then chivvied the puppies outside to do that which puppies do. They are getting better at "doing" outside; we still have the little accident, but then that's a puppy thing, and chivvying them outside reduces the accidents.

We came in where they both asked to be picked up, and I popped them onto the sofa next to me where they had a brief scrap, then settled and slept. I watched more "Orange is the New Black" in which absolutely no-one "flopped them out"; something of a first for that show.

And then I set off to work. We had been asked for our Bank Holiday working preferences quite early in the year; I must have volunteered to have been working today... but having done Friday night I wonder if I did volunteer for today or just got given the shift? What with sleeping most of Saturday my Bank Holiday has been one day (yesterday), and much of that was stripping out the kitchen. I didn't want to work today; I would rather have had today off. I might have gone to Jack in the Green in Hastings. I might have gone for a rather good dog walk. I might have sat in the garden drinking myself silly. I might even have done a tip run to shift the kitchen wreckage we generated yesterday.

Instead I went to work.

As I drove up the motorway I listened to the pundits on the radio; flicking between DAB and FM. I'm sorry, but if anyone tells me they can hear a difference, I don't believe them.

The pundits on the DAB and FM were talking about how the cost of living is going through the roof, and were interviewing a chicken farmer. The chap was talking about how grain prices (for feeding the chickens) are rocketing what with a war going on where the grain comes from, and what with all the disruption at our ports. The chap said the cost of feeding the chickens is now four hundred quid a month more than it was last year, and that before long chicken will cost as much as beef.

As I listened to him I couldn't help but look at the miles of lorries queued up on what was supposed to be the coast-bound carriageway of the M20. How many of those drivers had been there all night? How many are going to put up with those working conditions? That's why the cost of living is going up and up and up - having all these lorries full of whatever it is we want to buy sitting idle can't be cheap.

There was also talk about the leader and deputy leader of the Labour party who (like the Prime Minister) are also accused of having staged piss-ups during lockdown.  After a few minutes on-line I found this which speaks volumes about the Labour party.

As of last Thursday (when anyone with any sense packed up for the Bank Holiday weekend) the Labour party were six points ahead of the Conservatives in the popularity polls. Six points ? Is that all? With a Prime Minister who has been caught out in his own lies time and again, a Prime Minister and a Chancellor who have both just had fines for breaking the law, and Conservative MPs caught re-handed watching filth in the House of Commons, why aren't the Labour party sixty points ahead?

Mind you the drippling democraps, tree huggers, and all the others put together can only scrape up just over a quarter of the poll. What is wrong with our country's political system?

I got to work and had a rather dull day mostly spent sulking about all the other things I could have been doing. And with work and sulking done I came home and spent an hour in the front garden sawing up the larger fragments of the old kitchen into more manageable sized bits. One of the disadvantages of having a smaller car is that (obviously) I can’t get as much into it as I could the three larger cars I had previously.

I can probably shift the kitchen wreckage in two car-loads now… if only I can park the car anywhere near home to load it up tomorrow.

We then fed the koi… and in the aftermath Bailey fell in the pond. It had to happen sooner or later; now we know that (like her brother) she can swim.

“er indoors TM” boiled up a very good bit of dinner; an incredibly good bit of dinner bearing in mind what we’ve now got as a kitchen is lacking (to say the least). I think it fair to say that the kitchen right now doesn’t come close to what we used to have when we went camping.