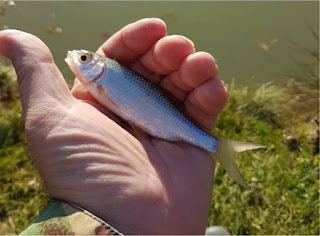 I slept well, and was surprised when I woke to find Fudge curled up next to me. Usually the puppy is the one who is close on the bed; Fudge generally stays at the bottom of the bed, and goes downstairs at the slightest disturbance.
I got up just before 7am, and over a cuppa I watched the episode of Dad’s Army in which Sergeant Wilson wore a lady’s girdle. I suspect it was funny forty years ago. Or perhaps it was a sergeant thing? Mind you I was once a sergeant in the Boys Brigade and I never wore a lady’s girdle.

I loaded my fishing gear in to the car and drove round to collect "My Boy TM". I was surprised to see Cheryl was with him. I suspected she was along to carry his tackle (!), but was even more surprised when she got into the car.
I didn’t believe a word when she said she was coming fishing with us. She’d heard we were going for a fry-up and didn’t want to miss out.
We went to the café in Brookfield Road. Yesterday I went to check they would be open this morning. True to their word, they were. I do like a fry-up before a day’s fishing. To be honest I like a fry-up at any time, but it is especially good before a day’s fishing; it sets you up for the rigours of the hunt (or something along those lines).

With brekkie scoffed Cheryl went home, and me and "My Boy TM" drove down to Shirkoak fishery. Once our favourite place to fish, just recently we’ve tried other places, but today we came back to our old favourite. We arrived to find that not much had changed; our photos were still on the notice board, the alpacas were still in the back field.
Fishing the place on a Sunday was odd. Usually we go mid-week and have the place to ourselves. Today there were several normal people about the place:
There were three laddy-lads whose f… every f… other f…word f…was f… the f… word. f… and f… that f…was f… shouted f… every f… time.
They got rather tiresome in the end.
There was a chap with a bite indicator which seemed to have a phone’s ringtone.
There was a rather obnoxious child who had brought his mother with him in much the same way that (if I was rich enough) I would bring my footman. Mother was obviously along to do the fetching and carrying and general dogsbody-ing, and from the way he was openly loudly lambasting her it was clear she wasn’t doing a very good job of it.
And then there were the visitors to the pond. Several people came to have a look around. One party had a small child (named Sebastian) who was rather rude because no one had caught anything in the two minutes whilst he had been there. He seemed to take our not catching anything during his visit as a personal insult.
There was one chap who pulled up in his car, walked to the pond’s edge, saluted, and then cleared off again.

Fishing-wise it was quiet. I’d decided to only use one fishing rod, but after an hour I set up a second rod. After another hour I converted the first rod to tiddler-bashing if only because it is easier to catch tiddlers.
I then managed to catch some tiddlers. And in amongst the tiddlers were a few bigger fish including my personal best fish from that lake.
"My Boy TM" had several fish; more than me, but still not as many as we had hoped for. In fact the one who seemed to do the best was the obnoxious child (ably assisted by his mother), but seeing how they were effectively a double-act I don’t think they should count.

We had a good time, but we knew it wouldn’t be warm (it is November after all). An hour before sunset the temperature fell noticeably so we packed up. It was only as I took my wellies off that I realised I was numb below the knees.

I took a few photos of the day; once home I put them on-line, and loaded the washing machine. With "er indoors TM" off to her works trip to Leeds Castle firework display I was able to do an “oh-sod-it” wash load. "er indoors TM" insists that the various laundry items are only washed with things of an identical colour and so we wait forever to get wash-loads together. When she’s not here I bung everything in together and no one is ever any the wiser.

I then scoffed the pasta bake that Cheryl had made for me. I say “made for me”; she’d made it for "My Boy TM"’s dinner, and he knew if he took it home uneaten he would be dead. So I offered to scoff it for him. I can be very kind like that.
As I scoffed it I watched another episode of “Peaky Blinders”, then another, and then the second episode of David Attenborough’s rather good nature documentary “Blue Planet II”. As I watched it Fudge snored, but Treacle seemed rather fascinated by it, which was as well. It took her mind off of the fireworks…

Yesterday I mentioned that I posted on a local Facebook group about a dog poo bun being full; some twonk has reported the post as being inappropriate…