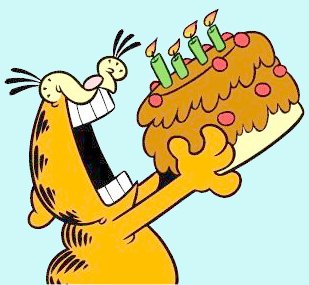 I spent much of last night's night shift giggling. Before I went in to work, I popped in to Aldi as I often do. There were two women conducting a rather loud conversation by the fruit and vegetables:
"We've no cat food"
"No cat food? What about the cat?"
"We've got food for him!"
This conversation begs so many questions. Why were they looking for cat food in the fruit and veg aisle? If they had no cat food, what does the cat eat?  And if he doesn't eat cat food, why do they need the stuff?

Work was work; as I drove home this morning the pundits on the radio shut up for two minutes so that they could broadcast President Trump live as he gave a speech in Korea. His speech wasn’t remarkable; in many ways it was rather embarrassing. Does he *really* make these speeches up as he goes along? It sounds like it.
There was something about this in the news the other day; we in the UK can understand how ludicrous he sounds because we speak a version the same language. But across the world those whose job it is to translate what he says into other languages are having a hard time translating what he says; their translations aren’t being trusted. No-one can believe that someone who is supposed to be President of the United States of America actually talks such rubbish.

I got home, and after waving at "er indoors TM" in passing I took the dogs round the park. Fudge was rather quarrelsome today. He tried to fight with a bus, several cars, two postmen and quite a few dogs. Treacle on the other hand ignored pretty much everything except the dogs from which she would run in terror.
And there would seem to be a shift of allegiances in the Viccie Park dog walking community. Those who used to be OrangeHead’s second and third division hangers-on have formed their own little gang whilst her-with-the-Scotties (who once was a lone dog-walker) now seems to have usurped the role of OrangeHead’s Chunky Little Friend. The original Chunky Little Friend hasn’t been seen for some time. I hope her little dog is OK; he had been ill recently.

With walk done the dogs went to sleep, and after some toast, so did I. I slept for most of the day, waking just after 4pm.
I watched an episode of “Peaky Blinders”, hopefully I’ll scoff some dinner in a little while, then I’m off for another night shift…