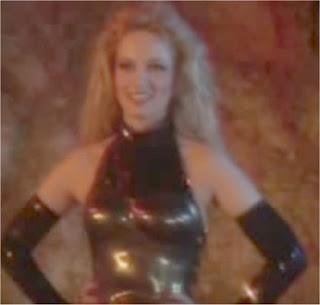 Yesterday I woke one minute before the alarm was due to go off. Today I woke three hours before, and then lay awake being alternately licked and chewed by the puppy.
I gave up trying to sleep, and over an early brekkie (spent with a dog that wasn't licking or chewing me) I watched the episode of Red Dwarf which featured Pete Tranter's sister.
I've read interviews with the young lady who played the part of Pete Tranter's sister in which she says that the thing she remembers most about filming that part in Red Dwarf was how cold it was.
I'm not surprised she was cold.

It was cold as I drove to work this morning. Again I marvelled at the idiots on the motorway. When driving along a motorway when I come to a junction, if I am staying on the motorway I pull into the middle lane to make space for people to join the motorway. I don't slow down so's to block everyone else.

As I drove the pundits on the radio were giving the shock news that following the Brexit announcement, the applications for nursing positions in the NHS from EU nationals are down by over ninety per cent on last year’s applications. Also many of the nurses who are EU nationals have left the UK and are going home, and most of them who are left are planning to leave soon.
Why are they going home? I've done this to death. I realise that there are those who voted for Brexit purely to achieve this. I sincerely hope they are happy now they have got what they wanted, but I would ask who they expect to run the country's health service now.
We might have shot ourselves in the foot by making them all feel so unwelcome. How many extra millions of pounds a week were we promised by the Brexiteers? Far from getting a boost to the NHS, we’ve lost loads of nurses. And (I suspect) all sorts of other health care professionals too.

I got to work early, which was just as well as I was on the early shift. I had a busy day, and came home. I collected Fudge, and together we went to the vet; he had his annual check-up and booster injections this evening.
Fudge doesn’t like going to the vets; he was pulling to get away all the time we were in the waiting room. I wish I knew why he hates the place so much; he’s never had a bad experience whilst I’ve been with him there. He never bats an eyelid when he has injections. The vet said he probably picks up on the pheromones from animals that are ill, or have had surgery. I suppose that is possible.
He had his jabs; the bet gave his back a really good going over (bearing in mind the problems he’s had) and says that all seems to be fine. The only problem was that they left it to me to get the worming tablet down his neck… I tried hiding in in cheese. He yummed up the cheese and sat the tablet out. Several times.

"er indoors TM" is off out tonight, so I shall see what I can find to watch on Netflix… “Peaky Blinders” sounds interesting.