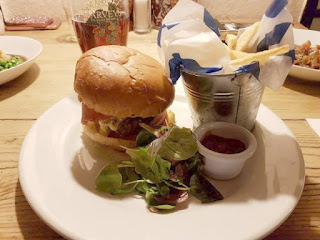 Somehow in the night an alliance of "er indoors TM" and two small dogs had pulled the duvet off of me and I woke shivering shortly after 5am.
Over brekkie I activated Netflix and watched another episode of “Red Dwarf” before staring into cyberspace. Not a lot had changed overnight really, but I had a message (via Facebook) from one of the administrators of a work-related Facebook group I follow. Several people have taken to posting medical pictures on that page with comments along the lines of “have a guess at what this is” and some of the responses are rather alarming; some akin to seeing a picture of a chicken and claiming it’s a three-piece suite. I suggested that people post some sort of description with their postings; if nothing else it might spare the embarrassment.
The administrators of the group agreed with me. Mind you I’ve made this comment to them before…

Also on Facebook was a communication to the Geocaching in Kent page from a newly-elected member of the committee of the Geocaching Association of Great Britain. Having spouted a few management catch-phrases it turned out this chap is in Tyne and Wear... He *could* be further away from Kent, but not by much.
Just as I activated my lap-top I had an email. Yet another of the world’s top one per cent of geoachers had just published their virtual reward. This team of Tupperware-hunters have found over ten thousand hides. However their contribution to the hobby is nowhere near as impressive. They have arranged three meet-up (two in 2013 and one in 2016), and have hidden a grand total of three caches; their most recent hide being published in 2009.
Hunting Tupperware as a hobby is entertaining, but the organisers have clearly lost their way.

I spent a few minutes scraping ice from my car's windscreen. It was rather odd that I'd needed to. When I'd looked out of my bedroom window when I got out of my pit earlier the cars were all ice-free, but in the intervening time they'd all iced up.
I drove to work along rather busy roads; where had all the traffic come from today?

As I drove the punters on the radio were spouting about Prince Harry's upcoming nuptials. In years gone by a divorcee  of mixed race who has starred in a mucky video would *never* be allowed near the Royal family. How times have changed.
There was also talk of how every stillbirth that happens in the UK will be seriously investigated so that lessons can be learned to prevent future tragedies. An admirable sentiment; they interviewed someone whose child had died at birth who gave a tear-jerking account of their terrible experience.
However they then scored an own goal when the chap interviewed said their child had suffered from Edwards Syndrome, sufferers of which usually die before birth, and only a quarter of those who survive birth live as long as one year.
I did my bit at work. What with the vagaries of the rota, today will be my last shift when I've got a workmate for quite a while. I made the most of it.

I came home to an empty house; "er indoors TM" had already taken the dogs for a walk. They all returned eventually, we fed the pups and drove down to The Bell in Iden. Regular readers of this drivel may recall I’ve been there before -14th August 2010, to be precise. At the time I said it was a pub to re-visit; shame it took so long.
We met father-in-law, and had a rather good evening. The food was good, beer was not too shabby… I won’t leave it quite so long before going back again…