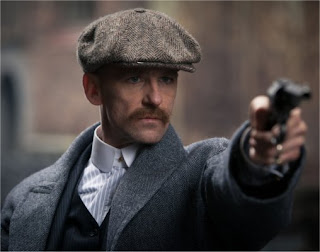 I woke rather earlier than I had hoped to, and so with a little time on my hands I watched the third episode of “Peaky Blinders”. I watched the first two episodes yesterday evening; so far it’s a good show. I hope it carries on in the same way.

Letting sleeping dogs lie, I set off to work. There was a minor hiccup whilst I tried to find where I’d left my car. Many years ago (twenty-six) when we bought the house we didn’t have a car, and so parking wasn’t a priority for us. I’m wondering I moving house to somewhere with a drive mightn’t be a bad idea; so often I am having to park so far from home.

As I drove to work the pundits on the radio were talking about how President Donald Trump’s Twitter account had been shut down for eleven minutes yesterday by a disgruntled employee. I don’t follow him on Twitter (personally I can’t stand Twitter), and I don’t need to; Radio Four repeat most of his tweets every morning. From what I hear of him on the radio the fellow is a complete idiot; shutting down his spewing of drivel can’t be a bad thing.
Mind you, I can’t help but wonder who he’s upset in the media. Is he *really* the bigoted half-wit that the radio portrays him to be?
There was also talk of how interest rates are rising. From what I can work out I will be a couple of quid out of pocket every month. Not much, but I’d rather have more in my back bin; not less.

I stopped off at Aldi on the way to work. Being there ten minutes before they opened I went to look for that geocache which is supposedly in the bus shelter by Sainsbury’s. Despite several attempts, I can’t find it.
By the time I’d had a good look, Aldi had opened. I got jam and marmalade (the cheap stuff) and had a look at their bargains. I got some new jim-jams and a new shirt too.

Work was good; one of the bosses had sent a circular email asking if anyone was interested in doing longer working days. I’ve done those before; I’m keen on doing them again. I’ve volunteered; we’ll see what comes of it.

And so home. I parked a hundred yards up the road from home. As I got out of my car, another passing car slowed down and the driver asked if I was going. Are these people stupid?
As I walked down the road I met "er indoors TM" who had been walking the hounds. They all seemed pleased to see me (some more than others).
"er indoors TM" boiled up some fish and chips and with that scoffed she went off to a chocoholics party (even though she don’t like chocolate!). I put more “Peaky Blinders” on the telly and watched it whilst I ironed my shirts and the dogs barked at the fireworks…