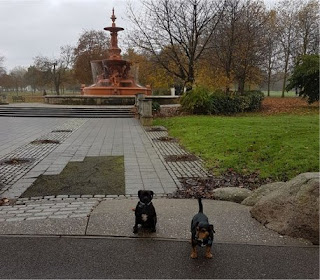 The puppy slept well, and consequently so did everyone else. But I did wake with a headache.

Over brekkie I had a little chuckle. There is a chap on my Facebook list. I’ve never met him, but a combination of a tenuous family connection and his occasional geocaching was enough to count as a cyber-friendship. His wife has taken several such vague associations to try to spread word of her business of selling tat on-line. Over the last few weeks Facebook has (for me) become increasingly little more than a list of her current so-called bargains. But not this morning. This morning she was complaining that the powers that be at Facebook have shut her selling page down (albeit temporarily) because of complaints that she’s been spamming the thing at all and sundry.
I can’t say that I have any problem with what the powers that be at Facebook have done. If I wanted to see that sort of thing over brekkie I wouldn’t open up Facebook’s website; I’d look at eBay.
So rather than reading adverts about stuff I can buy cheaper in the local shops, this morning I read a rant from an ex-colleague about how she is kept awake every night by the neighbours doing their washing and hoovering on cheap rate electricity in the small hours.
I'd also been nominated on Facebook to post a photo of my dogs. I do that pretty much every day, but I thought we'd have a better-than-usual piccie for this. So as I took the dogs round the park for their (our) morning constitutional. As we walked I was looking for somewhere photogenic -

The fountain in the park makes a good backdrop in a picture, so as we came past it I tried to get a "natural" shot of them, but they wouldn't oblige. They rarely do. For every photo I have of their heads I have a dozen of their bums. So I sat them where I wanted them for a photo, and they both wandered off doing their own thing. I fetched them back, and after five minutes arguing with them they got the idea of what I wanted and they stood still for more than two seconds. I was quite pleased with the result, and comments were made on Facebook that the dogs were both looking in the same direction for once.
We came home through the co-op field where we met OrangeHead, and my two dogs disgraced themselves by trying to eat a dead sparrowhawk. (I say "sparrowhawk"; it might have been a kestrel). Matters were not helped by OrangeHead's dog joining in the feast.

We came home, and both dogs sat with me on the sofa and slept as I watched the last episode of the last series of "Peaky Blinders". I've now only got to watch one more episode of the show to have caught up entirely. And with telly watched I settled the dogs and set off to work.
I went via the petrol station on the ring road where the old duck behind the till was (for once) entirely without suitors and admirers. I think she might have been giving me the come-on, but I wasn't having any of it.

I drove off to Larkfield where I hunted out a geocache; the location of which I finally figured out from last Saturday's brainstorming session. And with that found I went for McLunch. Yesterday I had the frankly awful curry sauce. Today I had sweet chili. Far superior.

I headed in the general direction of work, but stopped off half way up Hermitage Lane and went for a little walk. Yesterday I couldn't find a geocache along a footpath off of that road; today I failed to find two more along a different footpath. Other people had also failed to find them. I logged that the geo-feds should wipe these absent caches from the geo-map. The chap who hid them doesn't seem to be active in the hobby any more, he hasn't replied to the several messages I've sent, and the geo-feds have pulled the plug on other caches of his that have similarly gone missing. With those caches wiped from the map there will be space for new ones to go out.

I got to work. It started slow, but picked up as the day went on. A bit like me, really…