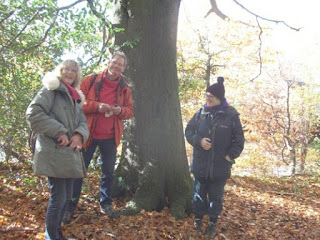 Over the night an alliance of "er indoors TM" and two dogs captured most of the duvet. Despite giving it a seriously huge tug back my way I only got about six inches of the thing. Really I should have got up and gone somewhere else to kip rather than laying shivering for much of the night.

Over brekkie I peered into cyberspace. Not much had happened overnight really. As I messed about on-line I kept more than one eye on the dogs. Yesterday they had a couple of fights; not play-fights – they were really nasty with each other and I got mildly bitten trying to separate them. According to what I’ve read on-line it is all to do with the puppy growing up and trying to assert herself. I’m reminded of one of the cubs (quite literally) kicking seven shades of sh*t out of his brother. This morning they started playing nicely – Treacle was offering an old sock to Fudge so they could play “tug”. They played for a while, but Fudge does have to growl and snarl, and it is a short step from play-snarls to real snarls.

Soon enough I got to the church at Knockholt, and pausing only briefly to put my boots on, I was soon acting suspiciously in the graveyard. We had a field puzzle to solve; we had to locate four graves from which we needed to get various dates. Three were easy to find, one not so. I had this idea that I could collect all the information before everyone else arrived. It was a good idea; but I wasn’t quick enough. Pam and Brian were only a couple of minutes behind me.
We soon got the required dates, and did the sums, but before moving on, Pam sorted out coffee and cake for us just as Aleta arrived. And suitable coffee-ed and cake-ed we went on a little stroll. The final location was… I won’t give spoilers on the thing, but it was good fun.
Pausing only briefly to not be able to find a cache just down the road, we drove into the village of Knockholt and had a little walk around. We cobbled together a route taking in a dozen geocaches; one eluded us, and one would seem to have gone when the road sign to which it was attached had been replaced earlier in the year. It was a good walk; we even met a rather noisy dog which looked incredibly like Fudge.
I took a few photos as we walked about. Not as many as I usually do, though.

We said our goodbyes, and made our ways home. One I was home I popped the leads onto the dogs, and we went for a wander round the park. As we walked we met a young girl out with her puppy. Amazingly Treacle didn’t run in terror, but played with the pup. The young girl wasn’t sure what to make of the growls and barks; it was the first time she’d trusted her pup off of the lead. I got the impression that she was pleased to meet someone who seemed to like her puppy and would let him play with their dogs.
Shortly after this we met OrangeHead’s Chunky Little Friend who was out with her dog (without Orangehead). Her dog has been very ill recently; it was good to see he was on the mend. He and Fudge played a little.
Both of my dogs chased squirrels as we walked through the Chinese garden. They liked that (the dogs; not the squirrels)

As we walked home through the co-op field I couldn’t believe my eyes. There was a chap squatting by the hedge. With his trousers round his ankles. He was having a crap in the hedge. Fudge was clearly about to go over and get involved; thankfully (for once) he listened when I called him (Fudge; not the bloke taking a dump).

With walk done I watched Star Trek cartoon on Netflilx until "er indoors TM" came home. Over a rather good bit of scoff we watched all sorts of stuff that the SkyPlus box had recorded for us.
I’m going to have a crap myself in a minute… but not in a hedge. I’m posh - I have a toilet.