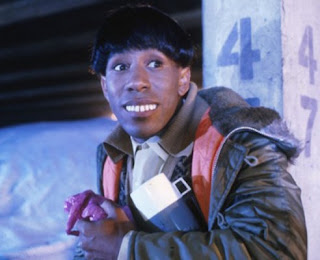 I woke literally one minute before the alarm was due to go off this morning. Over toast I watched the episode of "Red Dwarf" in which Duane Dibley appeared for the first time. After all these years it was still good.
I had a quick look at Facebook; it would seem that we were in the minority in not having trick-or-treaters coming visiting last night. But opinion on the concept of trick-or-treat was severely divided. Some saw it as fun for the children; others saw it as nuisance begging. I know what side I'm on in this debate, and will happily sing "sour-puss grumpy-face" at those who disagree with me...

I set off to work wearing a pair of my new pants (that I had rescued from the puppy). I went via the petrol station on the ring road; after all it does sell petrol four pence a litre cheaper than anywhere else in the town. As I filled my car a butcher came out of the kiosk. I say "butcher" - he was wearing a white coat and blue-and-white striped apron, both of which were heavily blood-stained. He was either a butcher or an axe-murderer. You wouldn't think he would wear that in public, wouldn't you?
Also as I filled my car another car pulled up in front of the kiosk (blocking everyone's way) and the driver hurried inside. When I went in to pay, the driver of this car was openly sniffing round the old woman behind the till; he clearly had no intention of buying anything. He had just come to chat to her, suck up to her, and generally "sniff". This happens a lot in the petrol station on the ring road. If they weren't so cheap I'd go elsewhere.

As I drove up the motorway the pundits delivering the news on the radio amazed me (as they so often do). My local MP has been accused of touching up a young woman during the course of his duties.
There was also talk about a Labour party activist who was bringing allegations having been raped six years ago, but had been told to keep quiet about the matter.
The people delivering the news were interviewing some crackpot woman who maintained this sort of thing goes on all the time in politics. I wish I could remember who this twit was; she maintained that victims of sexual abuse in the political world have no duty to report their experiences, but society at large has a duty not to allow it to happen in the first place.
What bollox.
How on Earth can anyone have any ability to stop something about which we know nothing?

The people presenting the news then announced that the Royal Navy has a serious shortage of spare parts, and the ships at sea are only kept at sea by cannibalising the ships in port.
I wouldn't have thought that telling the world about this was in the nation's interests, but what do I know?

I got to work; I did my bit. I had a horrible journey home. Firstly some twit tried to drive me off the road, then some other twit wouldn’t turn off his high-beam headlights. When I got near the house I couldn’t find anywhere to park.
And I came home to find the puppy had eaten one of my shoes.

Over dinner we watched the final of "The Great British Bake-Off". Mind you I knew the result already. Apparently one of the judges had mistakenly tweeted the result some time yesterday, and whilst ranting about how mean it is that spoilers are being given on social media, the people reading the news on Radio Four announced the result (as a spoiler) themselves.
And I must admit I was wrong. Over the years I’ve come to be a fan of "The Great British Bake-Off" and I *really* didn’t think it would work with a change to Channel 4 and the loss of three quarters of the regular cast. But I think this last season has been the best so far…