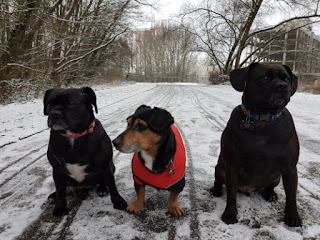 I slept like a log last night – I was asleep for nine hours. Making a point of pulling a foot or more of the duvet over my side of the bed probably helped though. I came downstairs some time after “er indoors TM” had got up to find out that Sid hadn’t done his signature move overnight. Does he crap just for me?

I had my usual peer into the Internet as I scoffed toast. I sent out a couple of birthday messages via Facebook and saw there were quite a few photos of the snow on Facebook too. In many places the snow has become ice. This is the big problem with snow. It looks pretty for a few hours, then becomes ice which is just dangerous.

Fudge seemed to be itching to go for a walk this morning. I can’t pretend that I was keen on the idea, but we went up to the park and home through the co-op field. The pavements were sheet ice; I was amazed at how many people were out and about on those pavements on bikes. We got to the park where Pogo barked at a snowman which was being built by a team of Ghurkhas, all of whom backed off seemingly in terror.

We met OrangeHead who seems to have formed a new posse. We made a point of not going anywhere near the children who were sledging on what is probably the only slope for miles around.

We came home after about three quarters of an hour. Even though he had his coat on, Fudge has lost so much weight recently it was too cold for him (not that he would admit it).

We came home where Fudge started shivering, so we towelled him down. All dogs then yummed their brekkie and were soon snoring. Being the morning before a night shift it is traditional for me to write up CPD, so I did.

After nearly an hour of dullness I finally got up to date with CPD, so I popped up to the attic room. Regular readers of this drivel may recall that on Friday I picked up something of a Lego bargain. I sorted through that bargain and took the stuff out of the carrier bag and into the relevant boxes (having spent a small fortune on boxes for Lego a week or so ago).

I went to bed for the afternoon and dozed fitfully until my brother phoned. My mum is much the same… she has little if any idea of what is going on.

I then sorted Lego for an hour or so until “er indoors TM” boiled up dinner. I‘m now off to the night shift – through the ice and snow. Here’s hoping…