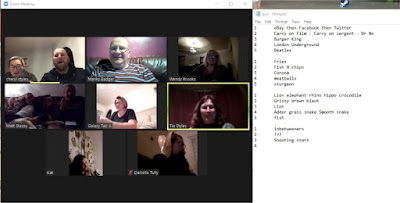 I slept like a log last night – what with all the driving about and one thing and another, yesterday was rather stressful. As I had a shave I heard Fudge whinging – he wanted to go out. He seemed rather subdued this morning, and didn’t bother me for any toast scraps as I peered into the Internet.

As I peered I saw that my father-in-law had shared a photo on Facebook. It was a picture of a van that had been stolen together with a whole load of tools. The caption read “The police told me to post photos, please help by sharing far and wide and make it too hot to handle......” – isn’t this entirely what is wrong with the police? By making it “too hot to handle” the police are hoping that the thieves will abandon the van so it can be recovered easily. But by then the thieves will have had the van’s contents, and would probably just set light to the van.

With ANPR cameras everywhere the police could probably find that van in minutes, but they don’t want the hassle, do they?. Since they clearly haven’t done so, why don’t they hand over the information to the general public who could go round and show these thieves the error of their ways? Possibly with some cricket bats?

It is like my old school where the headmaster had a cane. There were never wholesale floggings – but one boy might have a sore arse for a day and a thousand boys would behave themselves for a year. I once chatted with a chap from the deepest parts of China where his village really did have the stocks into which thieves were put. It was used about once every five years – the threat was enough to keep people in line.

If these scumbags knew that society wouldn’t tolerate their thieving, they would think twice about doing it.

I’ve said before (many times) that having a police force was something of an experiment that has now failed. We need to run society differently.

Another friend was posting on Facebook about the permanent closures of some pubs and restaurants in the Medway towns, and was wondering how many pubs and restaurants will survive lockdown. Many will go during lockdown, and I suspect many more will not survive in the New World Order which will follow the pandemic. Consider my pub visits of the last few years. When walking in a group every weekend we’d go to the pub at some point. A couple of drinks each and a few nibbles would cost the thick end of forty quid. Obviously we can’t walk right now, but when we last did we’d take some drinks with us in bottles and a few crisps in our bags and spend maybe a quarter of the money. We could have the beers of our choice (not whatever has been laying stagnant in the pub’s barrel for a month) and enjoy it where we pleased (*not* listening to the lager louts shouting at the television), safe in the knowledge that the dogs weren’t bothering anyone.

I’m certainly in no rush to go back to the pub on a weekly basis.

We took the dogs for a little walk up to the park (but not in it) and back home following the river. As is always the case at the weekends the park was heaving with normal people, and the path along the river wasn’t much better. I would rather have gone elsewhere, but time was against us.

We came home, settled the dogs, and I drove down to Hastings again to see mum. She’d supposedly had a good night (whatever that is supposed to mean). I arrived just as my brother pulled up with Dad. Dad went in first, then me, then my brother.

Mum seemed pleased to see me at first, but within seconds became very confused, then nodded off. She didn’t really make any sense in the time that I was with her. Again it soon became clear that I was tiring her by being there. I wish there was something I could do or say for her… but there isn’t.

I came home, and dozed in front of the telly until it was time for the weekly family Zoom quiz. We had a rather good quiz… mind you I still maintain I was robbed. Alan Shepherd’s golf ball on Apollo 14 *was* the fastest ever moving item of sporting equipment – when it was on its way to the Moon.

Much as I’m rather embarrassed to admit it, I probably see family more often these days when we make the effort because of lockdown that I did before…