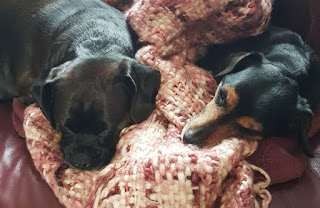 I slept like a log again, waking after nine hours asleep. I made toast, and today I had time to peer into the Internet as I scoffed it.
I saw two ex-colleagues had birthdays today and I sent out my standard “birthday video” via Facebook. One was a chap that I helped move house a few years ago. Having made the offer to drive the white van he was hiring even though he couldn’t drive, just me and him together loaded up all his stuff (and he had a *lot* of stuff) and took it to Southampton on  a little road trip.

The other chap was a trainee who I’d seen had finally passed his qualification exam yesterday. About four and a half years ago I’d applied for the post of training officer; one of my duties would have been to train this chap up to the qualification exam. I was turned down in favour of someone who management openly admitted couldn’t do the job of training him, and I was then asked to oversee this chap’s training anyway. Needless to say I resigned. Had I stayed and overseen the training I honestly think the chap would have passed his qualification exam two years ago. Not that I’m bitter…

There were quite a few photos of the snow on Facebook too. Some were rather pretty, but I’ve had enough of the snow now. With no more snow forecast but sub-zero temperatures expected for the next few days, we’ve now got to the point where the roads and paths are just sheets of ice.

With that in mind I didn’t take the dogs out. Fudge came in shivering after just going out for a tiddle, and Pogo would have me over on the ice where he pulls so much.

Instead I sat on the sofa and wrote up CPD. Dull, but a necessary task. Whilst I wrote up so the dogs snored.

I drove round to B&Q. On Monday night I went to Sainsburys and got entirely the wrong light bulbs. I got the right ones today. Whilst I was at it, I got some more plastic tubs for sorting Lego, and spent ten minutes staring at the tubs trying to judge whether two three-litre tubs were bigger or smaller than one ten-litre tub. Dur! And I've got a degree in maths too!

From there I drove up to the Vicarage Lane car park and risked life and limb on the ice as I walked up to the bank. The bank had their door locked, and some woman came and unlocked it every time they had a customer. What a frankly stupid thing to do; it really boiled my piss far more than such a trivial thing should have done. Mind you in retrospect it wasn't so much the unlocking and locking of the door as the patronising obviously-fake  sickly-sweet greeting the woman on the door gave out to all and sundry.

And with banking banked I set off to work. The motorway was open, and I made far better time to Maidstone than I did yesterday. So much so that I had time for a bit of shopping in Aldi, which is usually good for a laugh.

Aldi was heaving with normal people at lunch time today. I found myself following one chap who was constantly telling his lady friend about that which was winding him up. I suppose that having got so wound up at the bank over such a trivial matter I was in no position to judge, but I was chuckling  as the bloke was picking up random objects (at five-yard intervals) and announcing "this makes me so angry". Things which made him angry included jam, granola, chocolate, cheese and shaving foam to name but a few of the myriad items that rattled his cage.

I got to work and parked on sheet ice. Fortunately after yesterday's debacle I'd loaded a shovel into the car just in case. I did my bit at work and came out to find I didn’t need the shovel at all. Result…