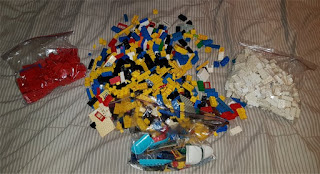 I was woken by the sound of Sid’s barking. He always shouts to tell when he wants a tiddle… he just has no control over the turds. Bearing in mind that he does shout about the tiddle it is obvious that he is trying.

I made toast and peered into the Internet and rolled my eyes. On Wednesday the nation was invited to stand of the doorstep and clap for Captain Tom who had raised money for the NHS. This morning quite a few of those who had been clapping were active on Facebook publicly shaming their neighbours who had not done so.

And postie arrived with two magazines. “The Biomedical Scientist” and “Viz”. I wonder which will provide hours of entertainment (whilst I am sat on the loo) and which will go into the recycle unopened?

As I peered into the Internet Fudge sat with me and ignored his breakfast that had been put in front of him. After ten minutes we swapped it for a bowl of biscuits which he yummed up. He was obviously hungry, but very fussy about what he would and would not eat.

And he continues to lose weight…

I drove down to Hastings to see how my Dad was doing after his boiler leaked earlier in the week. Having been told there was loads of tidying up to do I was rather surprised to see that pretty much all the tidying had been done. But I had a cuppa with him and spent an hour or so there. Whilst I was there we phoned the hospice to see how mum was doing. She’d had a good night (what does that mean?) and was as well as could be expected.

As I drove home the pundits on the radio were interviewing the founder of the Cambridge Satchel Company; a company which started with pretty much nothing and now makes millions selling what appears to be vastly overprices satchels to people who seem to like paying vastly over the odds. As is always the case with companies like this, the radio was singing the praises of one success story, and glossed over the thousands that failed. Mind you it was an interesting listen. You can hear the program by clicking here; it is well worth the half an hour.

I was amazed by the bit when the woman in charge said she  was advised to get a C-suite for her company; a C-suite is a load of executives with the word “chief” in their title. Each one of these cost the company about seven times as much as anyone who actually did any work, and after a while she sacked the lot and increased the company’s profitability in doing so.

Once home we took the dogs out to Great Chart for a bit of a walk. Some dogs walked more than others; some dogs rolled in more fox poo than others. Such is dogs.

And once home again I had a reply to an enquiry I’d made – I’d seen what looked like a rather good Lego bargain on Facebook earlier. Was the bargain still available? It was. I drove out right away to pick it up, then came home and had started ironing shirts when my brother phoned. Mum had taken a turn for the worse. Leaving the ironing I drove down to the hospice in Hastings expecting the worst. So much for the good night she’d supposedly had.

I spent half an hour with mum; she didn’t want me to go, but she was falling asleep constantly. My being there was wearing her out. When she nodded off for the umpteenth time I just quietly left; taking care not to disturb her.

The plan is to go see her again this weekend… snow and her still being with us allowing…
Posted by Manky Badger at 10:10 pm