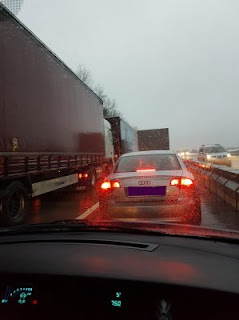 I woke shivering at quarter past two as the chap next door was shouting in in sleep. I suppose it is an improvement on listening to the neighbours “doing the dirty deed” I woke to find that an alliance of dogs and “er indoors TM” had captured most of the duvet and weren’t going to give it up without a fight. I dossed down as best I could and shivered until six o’clock.

I came downstairs and over a bowl of granola I watched an episode of “Superstore”. Half-way through “er indoors TM” and the dogs came down, made loads of noise at me, and then all went back to bed again.

With telly watched I had a little look at the Internet. Not much had changed overnight really, but I did see from my memories that a year ago today I staged the February meet-up of the Kent geocaching community. This was the last meet that got held locally before coronageddon put paid to any sort of social events. I do miss meeting up with geo-friends.

I set off to work through a rather wet morning. Wet, but nowhere near as cold as it has been recently. It wasn't long before I hit the traffic jam on the M20. A broken-down car blocking the carriageway two miles before a rather nasty smack-up on the two-lane "Operation Brock" section of the M20 added an hour to my journey this morning.

As I sat in non-moving traffic I listened to the pundits on the radio spouting their drivel. There was an interview with some woman who was volunteering at a COVID-19 vaccination centre who was talking about how everyone was saying that the pandemic reminded them of the hardships of the second world war. Really? Bearing in mind anyone born at the start of that war would now be eighty-one years old, just how good a memory did people have of their toddler years?

And there was a lot of talk about sending children back to school. Listening to the experts it would seem that educational theory and political correctness were far more important than any practical concerns about children spreading the virus about.

And there was a lot of talk of Prince (is he still a Prince - didn't he resign?) Harry who is now expecting a second child. Apparently his mother Princess Diana announced her pregnancy (with him) on the same day many years ago, about which many people have got rather over-excited. Bearing in mind that his wife has made a great song-and-dance about wanting to avoid publicity, I can't help but wonder what this announcement is all about. Am I being cynical in wondering if his dad decided to stop funding him?

Or perhaps seeing how there will be media interest anyway perhaps they just decided to bite the bullet anyway?

To be fair to the bloke, I'm probably just a little bit jealous that he doesn't actually need to ever work to be able to lead a lifestyle far better than mine.

I finally got past the accidents on the motorway, and got to work where I did my bit. I seemed to spend a lot of the day farting like a fruitbat. I bet Prince Harry didn't do that today. As the day wore on my innards got progressively iffier; so much so that when I got home I went to bed for an hour.