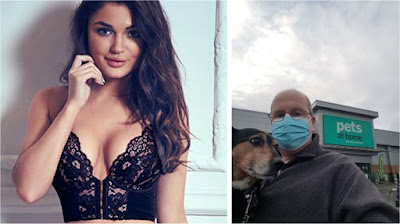 What I intended to be a very quick pop to the loo at four o’clock this morning became quite an epic mission as Sid leapt up, scattered turds with gay abandon and then took an age bimbling round the garden in search of the best place to have a tiddle. Having finally found a suitable spot he spent another age emptying out what seemed to be several gallons of tiddle. By the time I’d got back to bed three other dogs had made themselves comfortable in what was once my spot.

Four hours later I then followed Fudge round the garden (in a monsoon) in an attempt to get a bottle full of his tiddle (for the vet). I succeeded, but got incredibly wet in the process (rain, not dog tiddle!)

As I scoffed brekkie I peered into the Internet as I do. There were various opinions being bandied about over last night’s announcement of a third lock-down. Those who have always followed the rules were going along with it, those who don’t realise just how stupid they are weren’t going to have anything to do with it. And everyone had their own interpretation of just what was and was not allowed. Take for instance the ancient and noble art of sticking film pots under rocks… The geo-feds have unilaterally decided not to allow any new geocaches to be created. However they have done nothing about disabling all existing ones .The government COVID-19 website clearly says “you can only leave your home to exercise, and not for the purpose of recreation or leisure”. The Angling Trust have taken this to mean that fishing is now banned. I thought about posting this question to the local geocaching Facebook page, but in the end I couldn’t be bothered.

I drove over to Henwood to collect "er indoors TM"; she’d taken her car to be serviced. As we drove the roads were much quieter than usual. Perhaps people might just be taking this lockdown seriously?

Once home I went straight out again; today was Fudge’s six-monthly kidney check-up. He’s lost more weight, and (perhaps I was being paranoid?) the vet did seem to be a little reticent; not wanting to say very much until he’d got the result of blood and urine tests. The vet was probably quite right not to say anything without that information (I should know!) but I do worry about that silly dog.

With Fudge vetted we came home. I popped to the corner shop. They were open all through the last two lock-downs, and seem determined to stay open through this one. I got a sandwich for overnight and buns for the morning, and then settled down with my lap-top and my Fudge (and a cuppa and a bun) and wrote up a little more CPD. Some time ago I created an Atlas of Haematology; I’m giving the thing something of a facelift. Sometimes I worry that I do far too much CPD; I certainly seem to do more than many of my colleagues do, but better too much than too little…

After an hour or so the vet (Gareth) rang. Fudge’s kidneys are getting worse. SDMA, creatinine and urea levels were all raised on the last test result (which is only to be expected) but… The iffy blood test results *could* be related to the fact that he has a urinary infection. The vet has prescribed a two-week course of antibiotics then a repeat urine test and a check of his blood pressure.

I drove "er indoors TM" back to Henwood to get her car then went to bed for the afternoon.  I woke to find Fudge sitting at the foot of the bed. If I’d known he was there I would have helped him up.

I also woke to find I had an email. On Saturday morning I’d spoken with Limaksi  (from the power company). She was (is?) the tenth person with whom I’ve dealt about my ongoing smart meter issue. She confirmed what she had said in the Live Chat conversation, and said she was waiting for a reply from the smart metering team. She then rather let herself down by saying that she was aiming to have the matter resolved by January 24th, but I suppose that is far more of a response than anyone else has come up with. I suppose most people do work in weeks rather than minutes…

I’m hoping "er indoors TM" will boil up some dinner, then I’m off to the night shift…
Posted by Manky Badger at 6:08 pm