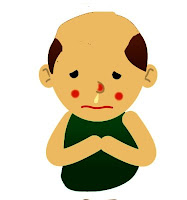 The benefit of having had an early night was more than wiped out by "er indoors TM" and the dogs going up to visit the rats shortly before midnight. And having made enough noise to wake the dead, Treacle then reprised the gist of the performance by getting stuck in a carrier bag and then having a fight with it at two o'clock.
This obviously begs the question of what she was doing with a carrier bag at such an ungodly hour, but I decided not to ask it.

I got up at five o'clock, and as I scoffed a bowl of granola I watched more of "The Office". I must admit I wasn't keen on getting up quite so early, but it does have the advantage of having me up before Sid has his morning "rake-out". That way  I can either get him outside if he looks to be stirring, or leave him snoring if he does not.
I had a very quick look at the Internet - it would seem that yet another unexpected "bonus" of Brexit is that we look to be losing even more of the Kent countryside. This time a lot of countryside in the Dover area looks to be being bulldozed to make way for even more space for lorries waiting for utterly unnecessary delays. Those who had vocally advocated Brexit a few short years ago were this morning were even more loudly complaining about the lorry park being built yards from their houses. As the old proverb goes, be careful what you wish for.

There was a minor hiccup as I left home. I looked over the road to where I'd left my car to see it wasn't there.  After a few moments I realised that it was the day before yesterday when I'd parked the car there; yesterday I'd parked it down the road.

We really do need to move to somewhere with off-street parking so I know where to find my car..

As I drove to work the pundits on the radio were still talking about the new American president who is doing his level best to reverse all that Donald Trump did. Which is probably for the best.

There was also talk of the pandemic (as always), and how people might possibly be able to take overseas holidays this year. I hope we can - having paid out for a holiday which was put on hold last year I'm hoping to go to Grand Canaria in June. Interestingly Saga ( the over-fifties holiday company) have announced that anyone going on holiday with them has to have had the COVID-19  vaccine before travelling. The bleeding heart brigade are up in arms about this - apparently this goes against their right to choose not to have a vaccination. Personally I say stuff them. Everyone these days has rights, and no one has responsibilities. It is someone's right not to have a vaccination. It is *not*  their right to go round spreading contamination like Typhoid Mary.

As I drove it was dark. Very dark. As I drove through Bethersden, High Halden, Biddenden, Sissinghurst, Goudhurst and Pembury I saw all these places have has the LED street lights fitted. Each light vaguely illuminated a patch of ground maybe a yard or so in diameter, and left ninety-nine per cent of the local area in darkness. These LED street lights might save energy, but they certainly don't illuminate anything.

I made better time to Pembury than I did yesterday, and having a few minutes to spare I went in to Tesco at Pembury. I've said before that I go in there as it is the only supermarket on my journey. If there was any alternative I would stop going there; the staff today didn't actually say the words "f... off fatso", but you would have to go a long way before finding a more surly and unhelpful bunch of miseries.

As I did my bit my phone rang. It was the power company who still had no news about my non-functioning smart meter, but were adamant they would have an answer for me by Sunday. Again I told them there was no need for the endless paperwork; they just needed to replace the thing. But the woman with whom I spoke had her script to follow. She wanted me to go through the entire rigmarole of explaining the issue (yet again) with the smart meter department before anything practical might be considered. Oh well… they’ve got a couple of days to do something. I wonder if the smart meter people will be in touch by Sunday? Somehow I doubt it.

An early start made from an early finish (as it does). Having got to work as it was getting light, I got home as it was getting dark. I got home feeling particularly rough. I wonder if I am sickening for something. Probably nothing a good night’s sleep wouldn’t sort out. I sat in front of the telly for a bit feeling grim, and at half-past six I tuned in to the virtual geo-meet. It was good to catch up with a few friends, but it was no real substitute for a proper meet-up.

I think another early night might be a good idea..
Posted by Manky Badger at 7:22 pm