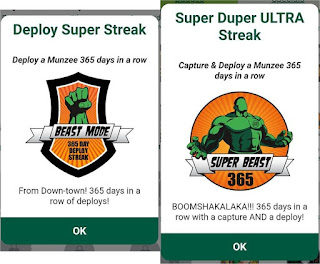 I didn't really sleep that well last night, eventually giving up and getting up just after five o'clock. I came downstairs to find Sid was still snoring, which was something of a result. If he was asleep he wouldn't have had the chance to crap in excitement, and a turd free morning is always a bonus. He opened one eye, looked at me, and went back to sleep, for which I was grateful.

I made toast and watched an old episode of "The Office" - can you believe that show is now twenty years old? And seeing absolutely nothing had happened on-line overnight I set off to find my car.

I found it - it was under all the ice in Bond Road. Today's was a frosty morning. When I'd eventually scraped the windscreen clear and got going I saw that the car's thermometer said it was minus seven degrees. That was nippy.

Having heard the motorway was closed this weekend for the removal of the "Operation Brock" barriers I was pleasantly surprised to see it was open. I wasn't impressed to see the barriers were still in place though. For all the government's talk of the Brexit deal, there were still loads of lorries queuing on the coast-bound stretch of the M20 between junctions eight and nine, all waiting to be allowed to proceed to the docks at Dover. The queues have been there since before Christmas.

As I drove I listened to the radio (as I do). There was some utter drivel about a young couple who had joined some sort of hippy commune somewhere in Sussex. There they all live in caravans until their patch of land is enough of a commercial success for them to afford somewhere better to live. This pair admitted they would be in the caravan for the foreseeable future but seemed to be very proud of a log-burning stove which was somehow very environmentally friendly.

Having wasted twenty minutes of national radio's air-time, this was followed by what I can only describe as stark staring nonsense. The government in India is very concerned about people being forced to change their religion. Apparently a lot of Hindu women are marrying Muslim men, and one or the other of each pair is being forced to convert from one religion to another. How on Earth is this a matter of importance? If someone is quite happy to announce that they have swapped one invisible friend for another, who cares? If they are happy to discard one fantasy for another, they couldn't have been very enamoured with their invisible ex-chum in the first place, could they?

I suppose that if they are under duress to make a statement that they are swapping one invisible friend for another, then there might be an issue. You have to wonder just who has got into a position of authority where they can force and cajole the public in this way. For thousands of years people have been at war over whose imaginary friend is real and whose is make-believe, and there are no signs that this sad state of affairs is going to end any time soon.

It amazes me that we can land space probes on other planets but still put such importance on crackpot religion.

As I did my thing my phone beeped. The nice people at Munzee HQ had seen that I'd capped a POI and released a jellyfish onto the motorway before work (never a dull moment when playing Munzee) and had given me two awards. The "Deploy Super Streak" award for deploying a Munzee every day for the last year, and the "Super Duper ULTRA streak" award for both capping and deploying a Munzee every day for the last year. Getting these awards for a GPS-location based game in a year which featured three lockdowns took some doing. It was as well that much of the game could be done from inside my car, and being a key worker with a fifty-mile journey every day helped too.

Mind you, bearing in mind the Boys in Blue  stopped two women yesterday, read them their rights and fined them two hundred quid each after they'd driven five miles to take a walk, and another got a fine for just sitting on a bench, you'd think that other Munzers might be a tad more circumspect. There are those who Munz who haven't quite cottoned on to the fact every bar-code they scan can be used as evidence against them. Making it painfully obvious that you have left the house to play a GPS-location based game often up to three times every day for the last year can be rather difficult to explain to the rozzers (not that I'm going to squeal anyone up just yet...)

One of the highlights of working on a Sunday is that the works canteen does a rather good broccoli cheese. Unfortunately today's wasn't one of the better ones; I spent much of the afternoon farting like a thing possessed (assuming, of course, that possessed things fart excessively).

I came home; "er indoors TM" boiled up a rather good bit of dinner, and with it scoffed we tuned in to the family quiz which was staged via Whatsapp. We came second, which was a result. It did help that we knew that Shirley Crabtree was actually “Big Daddy” and not Father Christmas as some of the family felt. And it also helped that "My Boy TM" had no idea that Amazon was a river as well as a shopping business.

We then watched the second episode of “Bridgerton” which was an improvement on the first. I think I might have an early night if only to see if my stomach settles…