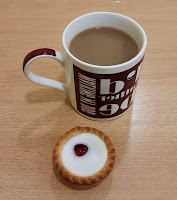 I slept well… until I had a rather disturbing dream in which I went on a drunken rampage with a rather over-excited John Travolta. I didn’t really get back to sleep after that.

I came downstairs to find Sid was waking. I got him outside and the floor had a turd-free morning (which was something of a result). I scoffed a bowl of granola whilst watching an episode of “The Office” then sparked up my lap-top. I sent my new birthday video to people who Facebook told me were having birthdays today, and on seeing absolutely nothing at all happening on-line I got ready for work.

As I drove through rather heavy rain the pundits on the radio were interviewing some postman. This chap has become a Tik-Tok internet sensation through singing sea shanties. He might be a sensation on Tik-Tok - he was something of a let-down on Radio Four, giving closed one-word answers to everything asked to him. He only elaborated on one question when he described how whaling boats would rip the tongue from whales and eat it. A bit too much for peak time radio, perhaps?

There was also talk of how Donald Trump has become the first American president to face impeachment twice. He got away with it last time, but I can't help but feel that he'll go down this time. But bearing in mind he's got less than a week left in office, is it all too little too late? I suppose if (when) he is found guilty it will stop him for running for the presidency in 2024. There had been talk of him forming his own breakaway political party; that won't happen if he can't get elected. But if he gets off again and does form his own fan club party, all it will do is split the Republican vote.

There was also a lot being said about sending three hundred empty lorries to Europe (with permission to jump the queues at Dover) so that they could quickly fetch back vital food supplies.

I made my way up one half of a motorway carriageway through some of the busiest traffic I have seen for a long time. It makes me laugh when those with political axes to grind claim that Brexit has had little (if any) effect and that the lock-down is being taken seriously by the public. Those who disagree with me might like to try driving on the M20 occasionally.

Pausing only briefly to get petrol I was soon at work. We had cake today. As always I posted a photo of the cake to Facebook, and as always I was mildly surprised by the responses. Does no one else work in a place where people having a birthday bring in cakes?

I had something of an  A-Pos day today, and was rather late getting out. This was compounded by not being able to park anywhere near the house when I got home. I ended up parking by the park gates. If only people could park sensible and not have half a car’s length in front and behind each car…

"er indoors TM" has gone shopping. I could have gone shopping for her, but I’d rather she did it. Apparently she likes it when Ido the shopping because of the “pot luck” element of what I bring home. I just hope she brings home some dinner… I’m getting a tad peckish.
Posted by Manky Badger at 8:18 pm