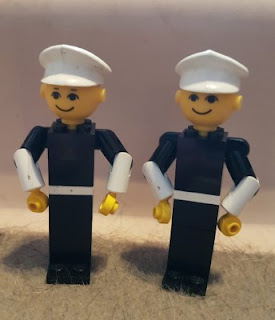 I slept well; another nine hours of kip. It was only a shame that I came downstairs to a sea of dog turds. Nice one Sid!

I made toast, and it got cold whilst I tried to quieten the dogs. One would bark for absolutely no reason whatsoever which would set the others off who join in for the simple reason that another dog is barking. And once all dogs are barking it is very difficult to break the barking cycle. As soon as one dog shuts up it instantly starts barking again because all the others are making a racket. And when quiet is finally re-established they are on tenterhooks for the next fifteen minutes poised to start yapping at the slightest provocation.  I love each dog dearly… but together we have too many dogs.

I set off on my morning mission. A woman just round the road was selling a bargain load of Lego so I picked it up on the way to Tesco. Tesco was much the same as ever; I didn’t actually point and laugh, but it never fails to amaze me that the hired thugs who now guard the entrances to supermarkets have more personal protective equipment than those working where they actually need to wear the stuff. As I shopped I met someone with whom I used to work four years ago. Looking back I was never overly happy where I used to work and it would seem the place has gone from bad to worse. A new manager had driven several staff to extended periods of sick leave (with workplace induced extreme depression) and following a formal investigation the manager has been reinstated. Much the same happened when I used to work there. Because the place has a zero tolerance for bullying of staff, no allegations of bullying will be considered by senior management because they feel that simply having a no bullying policy means it can’t possibly happen.

I’m so glad to be out of that place.

I then drove down to Hastings to see mum and dad. Today was dad’s birthday; I took him a card and some special biscuits and gave him instructions to let me know if he wants anything in particular. I could have wasted  money on something he would have put in the bin, but thought I’d rather get him something he wants.

Mum was as well as can be expected; she was out of bed and sitting up. But she was very drowsy. Morphine does that.

I stayed with them for an hour or so before coming home.

Once home I walked the dogs round the block. Pogo pulled and Fudge straggled. It comes to something when Treacle (the pain in the glass) is the best behaved dog. I then unpacked my Lego bargain. There were a couple of blue angled tiles which were just what I wanted to complete my Lego Renault, and there were a couple of police maxifigures. These alone warranted the cost of what I paid… and all else was a bonus.

My phone beeped – I had an email. “Sandra” wanted to be my chum on LinkedIn and was offering me a twenty quid bung for accepting her. I’ll be anyone’s mate for a cake. She’ll earn my undying devotion for twenty quid. On Facebook they beg friendship by offering pornography… does this mean you get a better class of spammer on LinkedIn? I was wondering if she would ever stump it up when she said she would have to give me an eligibility check, and then said she would pass me on to her project manager Ashley. Ashley then phoned me and gave me an eligibly check… I wasn’t eligible.

Oh well. I would only have squandered the money on Lego anyway…

Limakshi from the power company emailed me back. It turns out that the inability to read my smart meter was a known problem and asked me to submit my own readings. Unfortunately the power company’s website wanted readings for both electricity and gas… which rather defeats the object of having a smart meter, doesn’t it?

I’m going back to work tomorrow… these locked-down days aren’t good. I managed four days. How have people managed nearly a year of it?