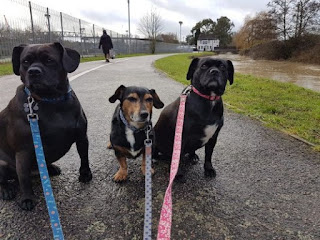 With no alarm set I woke about three hours later than I did yesterday; but fortunately I was still up before Sid, who hadn’t yet done his signature move on the kitchen lino. With no turds to gather I chivvied him into the garden.

I made myself some toast and scoffed it with Treacle watching me like a hawk. Periodically she would have a little tantrum because I wasn’t sharing it. Treacle really does have little tantrums much like a toddler does.

I sparked up the lap-top and had my morning rummage round Facebook. Apparently sexy Asian women in Ashford are looking for men over thirty-five. No specific reason was given but the implication was for a nudey-sauce-romp. They needn’t look at me. Other than that, Facebook was fairly peaceful this morning.

And with no emails at all, I got the dogs onto their leads and took them out.

We had a little walk up to what used to be B&Q, and followed the river round and back home. What used to be B&Q has now been entirely demolished to make space for more houses. I rather expected that it might have been demolished over twenty years ago when the international railway station was built, but for twenty years the place has effectively been wasteland. As we walked I got a photo of the dogs. I try for one of those most times when we go out. It has to be said that it was far easier to stop them wandering off today when they were on their leads. I got a photo in less than a minute – a fraction of the time it usually takes.

I came home to find “Daddy’s Little Angel TM” in residence. She made a cuppa, ran round the house shrieking, then went off to visit her mate. I wrote up some more CPD, then set off in the general (ish) direction of work.

I went via Sainsburys. I had orders to get some Katsu curry sause. Have you ever had it? It’s good stuff!! Mind you, Sainsburys was hard work. The normal people were out in force. One chap was intently staring at his phone whilst listening to God-knows-what on his headphones as he blundered round the store, crashing into all the other people who weren’t looking where they were going. Others were randomly jabbering away to the voices in their heads, but the one who wound me up was the one in front of me in the queue for the checkout. As the nice lady on the till scanned each of her items, this one reacted in total surprise as though she had never seen that item before. With the entire lot eventually scanned, she then told whoever was listening (no-one actually was) about how much she loves her shopping, and then spent five minutes searching in her purse to find the scrap on paper on which she had written the PIN for her credit card.

I suppose she could have gone slower if she’d tried.

As I drove to work there was a minor bit of excitement as the traffic was held up by a lorry which had spilled its load; its load being a caravan.

After this, the rest of the day was rather dull… but still streets ahead of being locked down.
Posted by Manky Badger at 11:04 pm