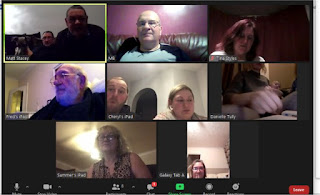 I slept like a log last night, finally emerging from my pit at half past eight. Four hours later than the last couple of days. I came downstairs to find that "er indoors TM" had dealt with Sid’s turding, which was something of a result for me. Less so for "er indoors TM".

I made toast and peered into the Internet. A few days ago a friend had messaged me about creating a Munzee garden in Kennington. I immediately suggested doing it in the co-op field for selfish reasons purely because that would suit me better. The wheels were put in motion, and overnight quite the Munzee garden had sprung up in the co-op field. I managed to get first to Munz on one whilst sitting in my living room.

As I pootled on-line the power company sent me a text message. Was I happy with how they were dealing with my complaint? I told them I wasn’t. They asked why, so I told them that they hadn’t actually done anything. They thanked me for the replay and assured me that they would learn from this and would strive to do better. I wonder if they will.

Jose then sent me a link to a Lego bargain. Unfortunately it was a super-bargain which had sold overnight, but in his searching about he found another Lego bargain on Facebook marketplace just down the road from me which I drove out to collect.

As "er indoors TM" Zoom-ed at her mates I wrote up more CPD. Today was Dohle bodies and cytoplasmic blebbing. A dull task, but one day it might prove worthwhile.

We had hot cross buns and a cuppa, then took the dogs out.

Bearing in mind that woods and fields would be muddy, and also bearing in mind how busy the park was last weekend, I had a plan to drive down to Park Farm where we could walk a circular route along the hard-standing paths up to the bypass and back through the paths through the estate. What with lock-down we are allowed out for a dog walk, but you can’t be silly with it (well, we don’t but others do). I’d planned our walk with three geocaches along the way that I thought we might use as waypoints to guide us.

Our first geo-target had a rather good hint: “Located at the root of a tree next to a small stream beside the bridge”. We found the obvious tree, and there was a rather obvious little hidey-hole, but no cache. We were just about to give up when "er indoors TM" saw what we were looking for floating in the stream. I didn’t fall in whilst retrieving the cache, but it was close.

Our second geo-target hadn’t been found since October and had a couple of “did not find”  comments on it, so we felt rather pleased with ourselves when we found it.

The third one we saw from ten yards away.

I had planned our walk to avoid the mud, but we still got muddy enough that the dogs needed a bath when we got home. And whilst we were at it, Sid got a bath too. He doesn’t go for long walks as they are too much for him, but he needed a bath. He had been getting whiffy recently. It has to be said he wasn’t keen it; so much so that he crapped in the bath.

Did I ever mention that I never wanted dogs?

We watched some episodes of “Four in a Bed” whilst I ironed shirts and "er indoors TM" boiled up dinner. We scoffed dinner wating another episode of “Star Trek; Lower Decks” then tuned in to what has become a weekly event – the family Zoom quiz. I didn’t come last… but it was close…