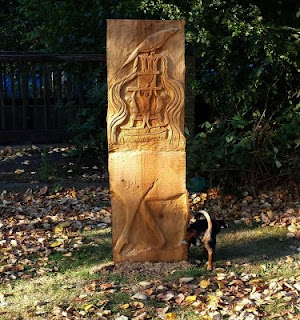 I woke very breathless in the small hours. My CPAP machine was doing its best, but there is only so much it can do. Another nasal re-bore is looking to be required. Mind you I was pleased to find my little dog curled up at my feet. It is some weeks since he last spent the night on the bed; he must be on the mend.
Over brekkie I watched the episode of “Dad’s Army” which the SkyPlus box had kindly recorded for me. In today’s episode Captain Mainwairing and his troops were running around dressed as Nazi paratroopers in an episode which (whilst rather predictable) was rather entertaining.

As I drove to work the pundits on the radio were wittering on as they do. They are now of the opinion that the aliens that the Russians discovered yesterday aren't aliens at all. Various possibilities were mentioned for what the Russians might have actually discovered; the leading contender seems to be a dodgy microwave oven in their observatory's staff room. Whilst this may well be the case, it rarely turns out to be so on Star Trek. Could you imagine Captain Picard being told it *wasn't* the Romulans after all, but Worf's cheese toastie?

And our old friend Science has declared that dogs *do* understand what humans say to them. This is hardly news. Dogs are clever creatures. (Some cleverer than others). I am sure my little dog understands every word I say to him. He doesn't take much notice of what I say, but he understands it.

I remembered to stop off at Morrisons to get fruit, and then went on to the early shift. During a tea break I phoned my GP to see if they could refer me back to the ENT people for another nasal re-bore. They said they would so now I’m waiting on the specialists again. Having had a look-see on the Internet this might be a regular thing every couple of years from here on in for me.

I had a grim day at work, but my little dog seemed pleased to see me what I came home. We went round the park and for the first time in three weeks we walked our usual complete circuit of the park without him coming home in pain. Whilst we were out he tried to pork an Irish Setter, and tiddled up the art nouveau.

And I'll close today on a note of disappointment. Some time ago I (yes me!) had a plan that the astro club might build its own observatory. The idea was snapped up by the (at the time) committee and quickly taken off my hands. Today is exactly three years to the day since the astro club formally announced its plans to build that observatory.

Initially there was a lot of excitement and talk; no one was more keen about the idea than me. We had all sorts of suggestions for sites, offers of building materials, plans drawn up, and a special sub-committee full of enthusiastic people who were raring to go. But since the council hijacked the idea the project has stagnated and is now realistically dead in the water. I've heard nothing about the scheme for a year. Three years ago we could have done something great, but the enthusiasm and interest that was rampant (from so many quarters) then is non-existent now.
Such a shame... it could have been something wonderful.
Posted by Manky Badger at 8:38 pm