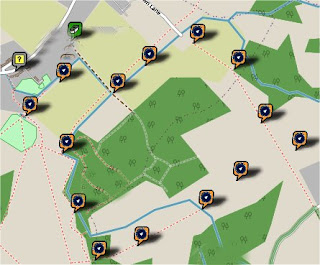 I slept like a log despite “er indoors TM” having a set-to with the dogs in the small hours. Pausing only briefly to unblock the bath’s drain I had a shave, made brekkie and peered into the Internet. Apparently last night the local police decided to do something about anti-social behaviour in the Newtown area of Ashford. Several people were posting on one of the local Facebook groups asking what all the blue lights were about, and the local Neighbourhood Watch organiser pointed out the link to the local police’s pages about combatting anti-social behaviour. I suspect that the more streetwise thugs will use this to plan their thuggery at times when the local coppers are elsewhere.

I spent a few minutes getting “Hannah” ready for the off. The dogs needed a walk, and a couple of months ago I’d done all of the hard work of setting up a new geocache series. Quite frankly I wasn’t really keen on setting up a new geo-series since I’ve got quite enough out there already (nine series with over a hundred and fifty caches) and they can be hard work at times. Everyone is very keen to walk the series I put out, and most people are even keener to point out any problems. Even though they could fix the problem themselves quicker than they could tell me about them. And there’s no denying that one particular person’s arrogant way of sneering at the rest of the geocaching community in general and me and “er indoors TM” in particular had really left me disinclined to carry on hiding caches.

But having done pretty much all of the work involved in creating a new series already (except having put the film pots under rocks), and having two dogs needing a walk I thought I might as well see this little project through. If it becomes arse-ache I will get rid of it - after all, archiving a geocache is just the click of a button.

We went out to the top-secret location. I’ve kept it quiet as there really are people who go out blindly hunting for the things desperately hoping to be there before anyone else, and then when the geocaches are formally published they go back to wait to tell potential First to Find-ers that they are a couple of days too late. (No - I wouldn’t believe it either unless I’d actually had it happen to me!)

The area was far muddier than it had been a month or so ago, and I nearly went arse over tit on the slippery stiles a couple of times, but we had a good walk.

Once home “er indoors TM” got the dogs bathed whilst I sorted out all the geo-admin for the new series of geocaches we’d hidden, then “er indoors TM” set off to collect “Daddy’s Little Angel TM”. I cuddled dogs on the sofa whilst watching episodes of “Good Girls” until they all arrived home. Having been scanned, “Daddy’s Little Angel TM” is nearly as porky as her father. I then drove them all home, and left the dogs with them. The dogs are having a little sleepover, and the house seems rather empty without them.