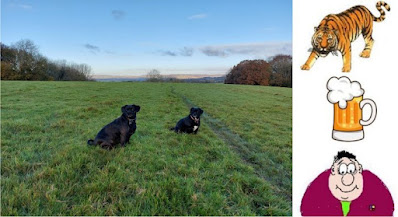 As I scoffed my brekkie I peered into the Internet (as I do) and saw several of the same sort of advert on many of the Lego-related Facebook sites. One of them read “So I have 4 lego harry potter calenders left due to timewasters and holding them for people who suddenly then ghost me” and the others were in the same vein. All ended with a little tirade about how the Advent Calendars (which had been bought to make a profit) are now being sold at a loss. It would seem that in the past there has been quite the market in selling Lego Advent Calendars but now people are asking themselves why they should pay over the odds for something they can buy themselves direct from Amazon. And those who have made profit this way in the past have been left high and dry.

There was someone else asking what was the best way to take payment for second-hand Lego as they felt that Paypal was taking too much of a slice of their profit. There really is a growth industry in selling Lego. Perhaps this is a bandwagon on which I might jump?

The plan for today had been to do the early shift but what with a colleague’s children going COVID-positive (I have grandchildren that have done that!) I was asked to do the night shift. I don’t mind doing nights… I get the day time to walk the dogs.

We walked seemingly miles to where I’d left the car and set off. As we drove the pundits on the radio were talking about who the guest editors of the morning news program will be over the Christmas period. Every year when everyone else is on holiday and I’m still working, the morning news show is hijacked by various people of whom I have never heard, all of whom have their own personal agendas to push. It would seem this year is no different – I’ve only heard of one of the people they’ve got lined up – and I thought he died years ago.

They also rather worried me when it was announced that the Secretary of State for Digital, Culture, Media and Sport didn’t realise that TV’s Channel 4 wasn’t publicly funded.

We got to Brook. A couple of weeks ago I hid several Wherigo caches over that way. Over the weekend I’d had reports that three of them had gone missing. Two of them would seem to have disappeared; one was still there.

With caches located or replaced we then had a rather good walk. It was amazing just how muddy the area had become in a couple of weeks, but the dogs seemed to like the walk. And they didn’t seem to mind the bath they had to have when we got home. Both mud and fox poo had to be scrubbed away.

Just as we were settling down so there was a sound at the door. The postman had delivered a couple of letters and the dogs were going berserk. The commotion seemed to be lasting for far too long so I went out to see what was going on. Postie was standing right at the door seeming to be deliberately provoking the dogs. As I chased the dogs into the living room so postie hurried away. I opened the door to see postie actually running down the street. Had he been deliberately provoking them? It would seem so.

The postman had brought a letter from the local hospital. Apparently there was some issue with some CPAP machines in which they would overheat if used in tropical climates. The hospital wondered if I had one of those, and also wondered if I could give them a ring as they had absolutely no information on exactly which model of CPAP they’d given me. However the phone number they gave me went to an answer machine which told me it was unable to take any messages. I’ll try again tomorrow.

I made a cuppa and logged what I’d done on our walk the geo-website. If I don’t do that I only have people whinging at me about it, then I spent a little while copying old CDs onto the USB music stick I use in the car. The old car’s MP3 player was rather special and didn’t recognise half of what was on the stick. I’m hoping the new one MP3 player will.

I watched a couple of episodes of the new season of “F is for Family” then went to bed for the afternoon. Despite having a hot water bottle, I shivered. Have you ever tried to sleep during the afternoon? I am always *so* cold. Perhaps if I had hoiked Treacle off of the hot water bottle things might have been better?

After a few hours of shivering I got up and did the final on-line preparations for the New Years’ Day geo-event. That’s pretty much ready to go now. Rather than going for an extremely muddy walk we’ll play a couple of Wherigos at Frog’s Island then walk round to the Riverside for a pint.

I’m hoping that “er indoors TM” will be home soon to sort some dinner, then I shall be off to work.

I wonder if that MP3 stick will work?
Posted by Manky Badger at 6:11 pm