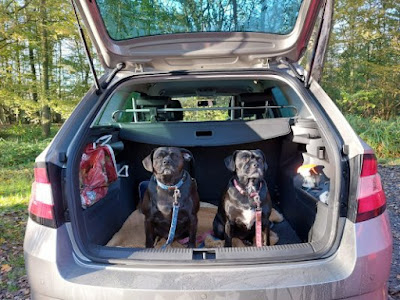 There was quite the argument kicking off on one of the local Facebook pages about a local vet who hadn’t been able to work wonders on a dying pet. All of the local vets were getting praise and abuse in equal measure, with none seeming to do any better than any of the others. Interestingly the vets which came in for the most praise and least abuse were those who were furthest away from Ashford. With a dozen or so vets within striking distance of home, why would anyone drive for over an hour to an independent vet in a distant country village? I was reminded of a chap with whom I used to work who wouldn’t use any shop within forty miles of his house. Even his weekly food shopping came from somewhere miles away for some reason he was never able to convey.

I had a few emails from someone who had visited Ashford yesterday and seemed to have been impressed with some of my Wherigos, which reminded me I’ve still got an ongoing Wherigo project to finish.

“er indoors TM” set off to Asda to collect the shopping she’d ordered, and I finally had a look at the humungous box of rubbish I’d emptied from the old car. I was (and am) determined not to carry round quite so much unnecessary clutter like I did in the old car. One such utterly useless thing I’ve been driving round with is a very old ordnance survey map of the East Kent area. Why do I need it? I have an interactive one on my phone, and the old one is so old it doesn’t even have Samphire Hoe on it and that was made nearly twenty-five years ago. And the power cable to the air-bed pump. We’ve not been camping for over four years, and the pump for the air beds is long lost. But I’ve still got the cable for it and have been driving it fifty miles to work and back every day.

Am I the only person who does this? Look in your car’s glove box. Go on – have a look. When did you last use anything in there? I’ve decided that my car’s glove box will have the car’s instruction manual, the locking nut for the wheels and a pair of sunglasses. And nothing else!

Getting the dog-proof rail across the back seats took some doing. There isn’t a central head rest to attach the thing to, and it is too tall to go there anyway. So I’ve bodged one bar of it into place. If the dogs wanted to, I think they could jump over it but it seems to act as a deterrent for now.

I then bit the bullet. Up till now the car has been pristine. Immaculate. Quite literally just out of the showroom. I got the dogs into the boot and we drove to Orlestone for a walk. Is that Boot Dogs 2.0 or Boot 2.0 Dogs?

The dogs took to the new car well in that they stayed in the back.

As we drove the pundits on the radio were interviewing the Mayor of London Sadiq Khan about the ongoing case in the courts in which a serving police officer pleaded guilty to having taken photos of two murdered women, and made degrading and sexist insults about them on these photos which he shared with more than forty other police officers via their WhatsApp group. Love him or loathe him, Mr Khan made a very good point when he said that our country’s police forces look after the country with the consent of the public, and incidents like this do nothing to inspire that consent. As far as I’m concerned this is just another example of the failure of the current police forces, and it is high time we had another system.

We got to the woods and had a good walk. We barked at the same dog we barked at the last time we were there; the other dog’s mummy had a laugh. Which is why I like going to those woods. Most of the other dog walkers know what dogs are like, and there are never any squabbles about dogs doing what is in their nature to do.

As we walked it was so apparent that autumn had arrived. Fallen leaves were everywhere covering the paths, and because of this we missed one of our usual turn-offs. I wouldn’t say we were lost; how can you get lost in such a relatively small wood and with maps on your phone? But we did have a ten-minute detour.

Once home I had a look at the lawn. I suppose it was too wet to mow; in my mind I could hear “Nutty Noodle” the (in all seriousness) probably insane husband of not-so-nice-next-door shrieking at me not to mow the lawn. I’ve not seen him for some years (where is he?) but one of his many obsessions was not to mow wet grass, and on many occasions he formally ordered me to put the lawn mower away as the grass was too wet. But despite it being sodden it was long. Too long. The lawn needs to be short so that we can find (and clear away) the dog dung. In retrospect I didn’t so much mow it as scalp it, but it is now at a length that the dog dung is obvious and doesn’t require searching for.

I did a little CPD, watched an episode of “Good Girls”, and went to bed for the afternoon. The dogs did declare “Red Alert” once, and despite the phone’s mobile data and wi-fi being switched off, the phone did shout about pond filter bargains on eBay. But I managed to doze off and slept for perhaps the longest I have ever managed to sleep before a night shift.

“er indoors TM” is currently boiling up a pizza, and then I am off to the night shift. There are those who pity me and wonder how I do it. I do find them tiring, but there is something satisfying to be trusted to get on with the job utterly unsupervised.